Baja Windseeking with the Shred Sled 3:1 Hydrofoil Board – Wyatt Miller

Migrating from Baja to Hood River with the Shred Sled 3:1 Hydrofoil board 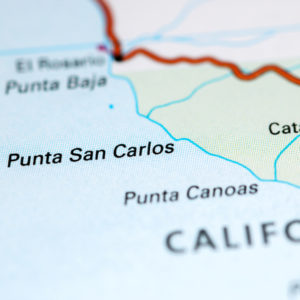 On my annual migration North from Southern Baja to Hood River I got the chance to stop at the legendary windsurf spot, Punta San Carlos.  The place features a half mile long, top to middle, peeling point break that is nice and slow – absolutely perfect for windsurfing and foiling.  The main purpose of the trip was to take advantage of a strong overhead South swell forecast and get some serious windsurfing in at my favorite wavesailing spot.

Though the wave forecast was just about as good as it gets, you can never really rely on the wind.

I brought along: surfboards, SUP boards and the new Slingshot Shred Sled 3:1 hydrofoil board.

We scored perfect windsurfing conditions the first 3 days and then the wind quit almost entirely for 5 straight days and boy was I glad I brought along the Shred Sled and my new Hover Glide FWing hydrofoil.   I have SUP’ed since the beginning and ridden everything from 11’ logs to tiny little 90l SUP boards that required me to paddle in circles just to keep my balance and paddle unreasonably hard to make it back to the lineup.   Over the years I have learned that when SUP’ing I desire a bit of relaxation that comes from a board that I can stand on comfortably just bobbing in the lineup.  If I want to work hard, I would rather be prone surfing on a shortboard.  For me the SUP is all about being able to spend all day in the water catching waves with minimal effort.   Though the Shred Sled is only 7’ foot, it had plenty of width allowing me to spend hours in the surf without paddling in circles.  The 143L of volume made it insanely easy to paddle up to speed and catch even the fastest hand overhead set waves with only a few paddles.  Once up on the foil it was plenty nimble to make solid turns back to the peak and was pumpable enough to outrun the faster sections. 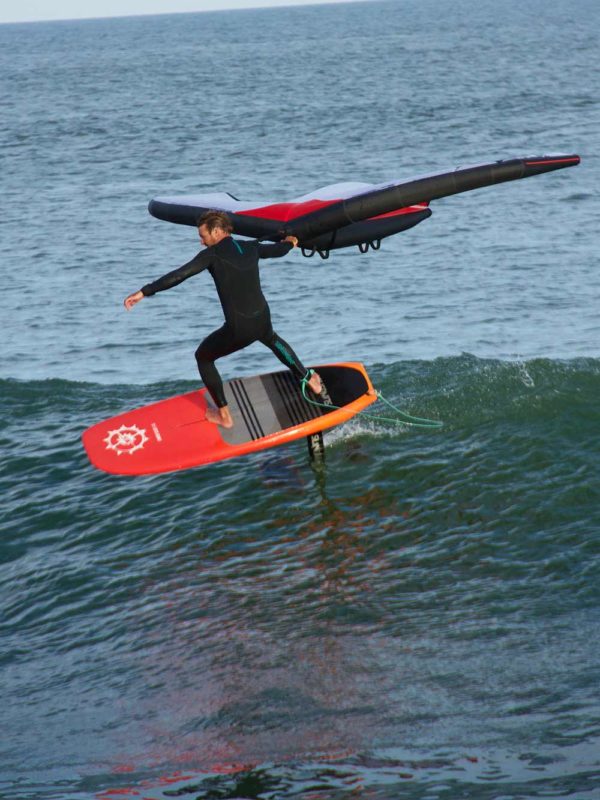 There were a couple days when the wind came up just enough that the kiters could launch their kites but not windy enough for them to stay upwind.  Instead of battling the breeze with my paddle, I pumped up my 5.4m Slingwing V2 again paired with the FWing hydrofoil and headed out to snatch a few waves.   I am a proficient winger, but I did not have enough wind to get on foil with the wing and was starting to get a little bummed, but that is exactly when the Shred Sled surprised me the most.

The thing would go upwind like crazy while underpowered and not on foil, it was like a dream, insane upwind ability while barely slogging along.

I could motor right to the takeoff point and just stand there on my nice stable board waiting for one of the bigger set waves expending no energy at all.  Then, when the wave came I was already standing in the perfect spot and the wind that the wave generated was just enough to bring me up onto foil and make the drop.  I was laughing taking 200m long rides and then cruising right back upwind to the peak, time and time again.  I just could not believe how well the Shred Sled went upwind without enough wind to get on foil.  Kiter after kiter ended up downwind walking home, while I just motored 200m back up to the takeoff point.  I had never caught waves on a SUP foil without being on foil first and was absolutely amazed how the Shred Sled let me sit at the peak and pulled me right into the set waves from a dead slog.   So fun!

On the slightly windier days I would put on my 5.2 windsurf sail and cruise way downwind to catch and explore waves I had never surfed before.

The Shred Sled was loose and fun in the waves and its size gave me the confidence to make it back home even if the wind dropped.

Its upwind ability with the windsurf sail once on foil was wild, it almost felt like I was sailing directly into the wind.

A couple days later the wind cranked back up to 25kts and I put the old faithful Sled back in its bag and went wavesailing for the remainder of the trip.  But after my first experience with the new board  in Punta San Carlos I will be sure to make room for it in the van on my next swell hunting journey, it was a serious trip saver. 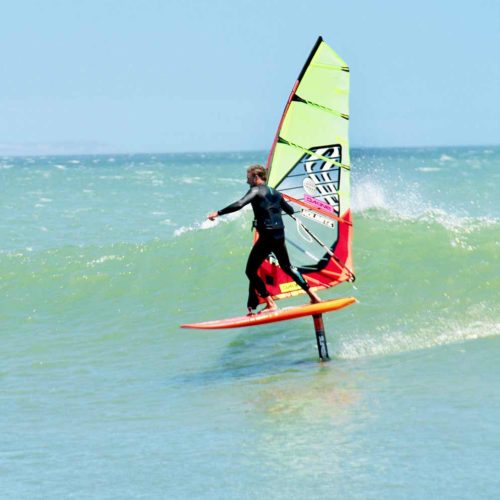