Houston Kiteboarding is one of the largest kiteboarding and hydrofoiling schools and retailers in the USA. They are unmatched in experience and expertise when it comes to kiteboarding. We were thrilled to have them include the newest Slingshot kite, THE GHOST V1, in their single strut review.

This is our Houston Kiteboarding single strut kite review on Slingshot’s newest kite 2020 THE GHOST V1. We’re going to do a full weigh-in of all the sizes. At the end of the video, we’re going to start off with Chris kind of giving you a laydown of the things he enjoyed during the demo and I’ll talk about what I thought later on in the video. So enjoy.

I have the Ghost V1 here. We’ve been riding and teaching on this kite for about four months now. It’s the kite that we fight over to get our students out on the water or to just go out and ride ourselves. This kite is amazing. I have flown some, one strut kites before and the moment I got on Ghost V1 with a twin tip and very light wind it took me upwind, no problem. From there I knew that we had something special here. One of the most special things about this kite, and what I think one thing a lot of other kite companies could take note of is the fact that this kite does not flutter, not one bit.

When you’re riding just a normal park kite, a kite shouldn’t really flutter. Almost every one strut kite I’ve ever flown flutters on the turn. That can be distracting, especially when you’re foiling and you’re trying to make a turn from heelside to toeside.  So having no flutter is absolutely amazing. This kite can also kills it on a twin tip. Are you are going to get your super highest jumps on this guy? Probably not. But, if you’re looking for a one kite quiver, you want to go foiling, but maybe then the wind picks up, so then you can pull out your twin tip and this kite will have you covered.

I’ve literally had the 17m down to about probably 8mph all then the way up onto a twin tip in about 22mph plus wind. The kite is rock solid. I don’t recommend taking your kite that high, but just know that you could do it. We have every single Ghost size from 2.5m – 17m in stock at Houston Kiteboarding.

Question: How is the relaunch in 10 mph wind? Compared to say the Slingshot Turbine, the Air Rush Ultra or the Ozone Alpha one strut kites.

Answer: The relaunch on these kites is absolutely amazing. Honestly, I’ve yet to put it down in the water and not get it back up. And that is in 8mph wind.

Question: So with the one strut, how, did you actually maneuver a relaunch? Like what are you doing to get it up in 8mph wind?

Answer: Basically, to get up in lightwind, you pull on one of the back lines and then partially on one of the front lines. It’s a good trick to know and then the kite comes up, no problem.

Question: How about a reverse relaunch?

Answer: You can definitely reverse relaunch this kite. Pull the two rear lines together and the kite will relaunch. It is a good trick to practice and know how to perform beforehand. The single one strut kite is great for lightwind flying.

Question: How does the 10m kite do in the lighter winds?

Answer: The 10m is pretty amazing. It will stay up in the sky compared to most bigger kites in light winds. I think the size of the kite is really going to come down to just how much pull do you need to feel. This kite goes all the way up to a 17m, which originally, I thought was kind of crazy. You know, it’s like, hey, this is a foil kite that they’re making. Why make it a 17m? But I feel like that a person just getting into foiling sometimes could really use that low-end grunt and have a lot of range and do well in light wind. If you’re more proficient, I think the 12m and the 10m are going to be probably one of the best-selling kites out there. 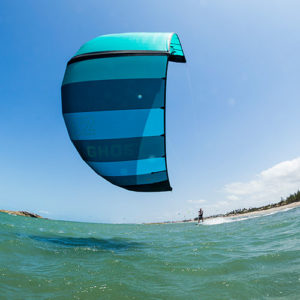 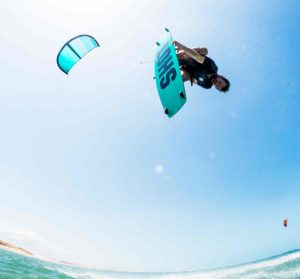 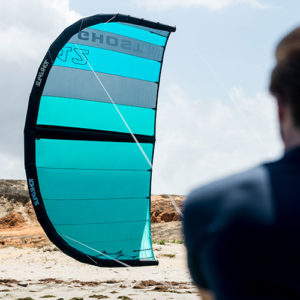 The big thing we’ve talked about before is the Ghost compared to the other one struts. We’ve tried like the X light, the Alpha from Ozone and the Ultra from Air Rush. The Ghost is the one that has a bit of grunt and a bit of pull to it.

CHRIS: Yes. The Ghost has an excellent low end to it, which I feel is, is something really great for foil people. You might not realize how having that ability to feel the power as you’re getting up and getting foiling, it’s just amazing. So not a lot of the other kites will give you that.

INTERVIEWER: That’s definitely in my mind, the big, the big difference between the V1 Ghost and some of the other one strut kites on the market

CHRIS:  Yeah. And like I said, I mean I’ve put students on this kite and everybody that’s been on it, has been asking me where can I get one? How can I get it? Well, they’re in at Houston Kites, let’s do it!

So good review from Chris. I don’t know if you can tell, but he really likes to Ghost. He’s had a lot of fun teaching and riding it in the last couple of months. The Ghost is kind of a niche kite that really scratches that itch for a lot of people especially those who are just getting into foiling. They need a lighter kite that can fly in not a lot of wind, but still need that kind of low end, grunt to kind of makeup for not hitting tacks and jibes due to the light wind.  The kite flies great in light winds, plus has the pull. As you heard it’s even a lot of fun on a twin tip. The thing Chris didn’t mention is the way the 17m is shaped, makes it super-fast. It’s like the fastest turning 17m across brands and you can even loop it, which is super-duper crazy. They’re all really, really fun to fly.

We are now actually measuring each one of the kites, the 6m, 8m, 10m, 12m, 15m, and 17m Ghost.  Due to the new 4×4 Canopy tech material that aids with the lack of flutter these kites are a bit heavier. You can check it out in this chart to compare.

ASK A HOUSTON EXPERT ABOUT ANY SLINGSHOT KITE.