“If we can feed them with the right gear at the right time and set them free, they’re going to push the sport to places we never imagined.” Tony Logosz, Co-founder, chief designer Slingshot Sports.

Pair prodigy-level athleticism with mad-scientist designers and exciting things are bound to happen.

That’s certainly the case with Slingshot, who has a long history of teaming up with young talent to push the envelope in innovation and redefine the limits of the sports in which they create gear. With the addition of Jeffrey and Finn Spencer as their newest team riders, Slingshot will carry on that tradition in their SUP/Surf/Wing hydrofoil program, which has built a solid reputation as one of the most innovative and progressive in the industry. 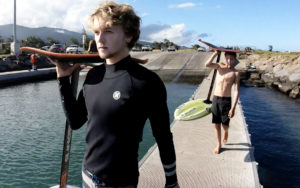 At 15 and 17 years old, the Maui-based brothers have made waves as young phenoms in the competitive SUP surfing world are now on the front lines of progression in SUP and surf foiling and downwind foil racing.

“Guys like Jeff and Finn are like windows through which we can see the possibilities of the sport,” said Tony Logosz, longtime Slingshot designer. “If we can feed them with the right gear at the right time and set them free, they’re going to push the sport to places we never imagined.”

Jeffrey, 17, is a three-time SUP Canadian National Champion with a long list of other top pro finishes over the last few years.

“We’ve tried a ton of different foils,” he said. “What drew us to Slingshot is that they have a diverse line of wings and masts that work well in any condition. They are also very high quality, which is super important for us.”

At 15, Finn is a mighty mite on the water, small framed with big aspirations. He captured the SUP world’s attention at the age of 13, when he gave the pro men’s field a run for their money at the renowned Bluesmiths Paddle Imua Race the first year they allowed hydrofoils.

“I’m really excited to be a part of Slingshot,” he said. “Of all the foils I’ve ridden, Slingshot is my favorite. They have a range of foils that are not only high performance but easy to use, no matter what condition. I think Slingshot will help me progress and achieve my goals by providing me with the fastest and most versatile foils in the world.”

As the creative genius behind Slingshot’s foil program, Logosz says having athletes like Jeffrey and Finn as part of the team is an essential part of progression and product innovation.  “Having these guys out there competing and pushing the sport on the Slingshot modular Hover Glide and Ghost Whisper foils is a big deal,” he said, “but that’s only part of the benefit. We also get inside development, testing, and feedback on custom foils and designs we want to work on. Having their fine-tuned understanding of how foils feel and perform is invaluable to the innovation process.”

See these resources for more information.

Learn to foil at Foil-Academy.com