Wyatt Miller, Slingshot Windfoil Brand Manager, has spent the last year testing, riding and just having an all-around good time with the 2020 Hover Glide Hydrofoil Wings. Here is his breakdown of the Infinity Series Hydrofoil wings and how each has totally different performance qualities.

Hey guys, Wyatt Miller here for Slingshot Sports, I’m going to give you the inside scoop on the new 2020 wing offerings from Slingshot. We’ve got two new wings and they’re pretty far apart. We’ve got the behemoth here. The ultimate go slow wing, which is the Infinity 99. We’ve also got a much faster, more nimble Infinity 65. This is your freestyle wing, your jumping wing, your 30-knot wing. Just to give you guys a little size comparison here, 65 is way smaller than the 99. The 65 is 841 square centimeters, while the 99 is 2,371. To give you a little comparison to what most of you guys are familiar with, this is our Infinity 76, it’s kind of my all-around favor go-to wing. This is what comes standard on the Hover Glide FWind package. You can see at 1500 square centimeters, it’s quite a bit bigger than the Infinity 65 and quite a bit smaller than the Infinity 99. Big difference. One thing that all these Infinity wings have in common is they all have the downforce in the wingtips that kicks in at higher speeds. They’re all really self-regulating wings that stop you from over lifting at higher speeds. On all these wings in the Infinity line, you have a lot of lift coming from the center of the wing at slow speeds. Then as you move to a higher speed, this sort of downforce in the wingtips, very similar to the twist-off in your windsurf sails, causes it to pull down a little bit at higher speeds. So instead of having to get further and further forward on the board, the faster you go, which is uncomfortable, you’re actually able to get more under both feet at medium speeds and then get back onto your back foot at really high speeds as it wants to pull down just slightly and really drive it faster.

It just makes everything easier. When I first rode it, what I was really impressed with over the Infinity 84 was how smooth and gradually it lifted. It just wanted to climb up, whereas I feel like the Infinity 84 really pops up quickly. This Infinity 99, just nice, gradual stable climb up. It happened as soon as you start to sheet in, so really before you have much board speed it’s starting to rise out of the water, but it’s not just popping up very quickly. It’s a nice gradual raise. Once you’re up and flying on this 99, I mean side to side stability is amazing. It really is like having training wheels. The increased width of the wing just really makes it very stable, and of course, your stall speed is insanely low. It’s like two or three miles an hour. 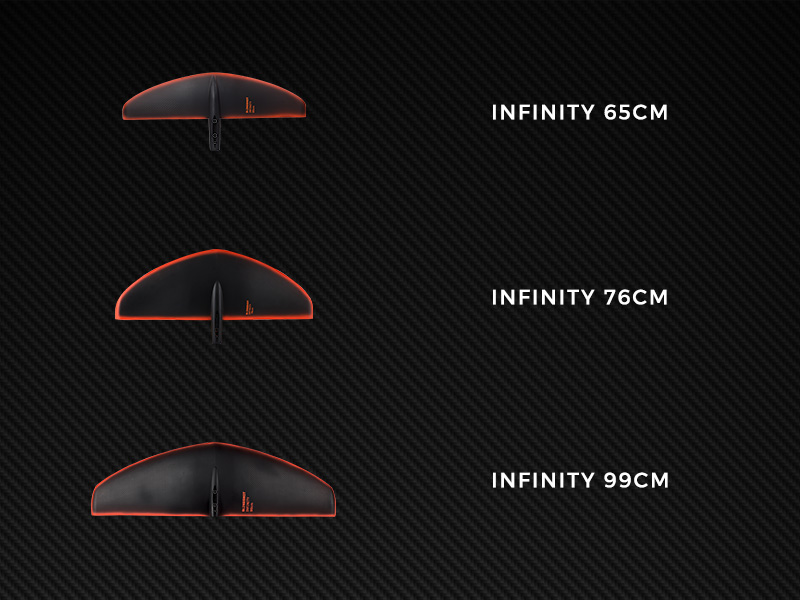 You’re really just laughing as you go through a jibe on this Infinity 99. It does not want to drop. You feel like you’ve almost gone to zero miles an hour before it dropped up. The one problem with Infinity 99 is this was really designed for behind the boat and for downwind SUP paddling. The bigger the wing, the further back the lift. So, this Infinity 99 is only going to work on boards that have a track mount system. On our Levitator board, this thing is amazing. You can slide the track forward and then you get your lift a little bit further forward. It’s so much fun, but it’s not going to work for all you guys who have the Wizard boards.

The Wizard board has a Tuttle so you’re really fixed with where you can place that foil, and it’s just a little bit too far back. You’re going to be on your back foot all the time. It’s not recommended at all for the Wizard boards. If you’ve got one of the new Freestyle boards that have a track in it or you’ve got the Levitator board, this wing is amazing. It’s like having training wheels. It just climbs gradually, tons of side to side, rail to rail stability, it’s a real winner there.

My favorite all-time wing right now though, hands down you guys, is this Infinity 65.

I’ve been waiting a year to release this thing. This is what Jack Muller and Mike Burns and all the guys are using to just do crazy freestyle stuff. This is the go fast wing. You’re going to be able to hit 30 knots on this thing. It’s got the downforce so it doesn’t overlift a bunch, but as a smaller wing the lift is further forward, and what we’re finding is as people get better and better at foiling, you really do want to be kind of front foot dominated so that as you transfer your weight to your back foot to cork this thing out of the water, it really jumps like crazy. So if you want to beat your buddies who have the race foils, or you want to jump like crazy and just go fast and do big turns, the Infinity 65 is amazing.

This is really all I ride unless the wind is really, really light. It probably doesn’t grip into the turns quite as hard as our Warp Speed 65 does, but it’s got a much lower stall speed. So for being able to go into a jibe and sail back winded for a couple hundred yards, it’s still got enough lift and float and drive to sail back winded, to go into burners and culos and all the crazy moves. I mean this is your freestyle wing. This is your go fast wing. This is your maneuver oriented jumping wing. I love this thing. It’s really all I use. As long as the wind’s blowing 18, 20, it’s fine. It’s all I really use. If it goes lower than that, I’d probably use something like the Infinity 76. And just to give you guys a little size comparison here, that’s the 76 next to the Infinity 65, so you can see you really do lose a lot of surface area there. The 65 again is 841 square centimeters, 76 is 1,534. So, for jumping and landing, you really need that Infinity 65. The Infinity 76 is just too big. However, when you compare it here next to the Infinity 99, the behemoth, the training wheels, the easy, the early riding, it makes that 76 look pretty small. At 2,371, the 99 it is way bigger than the 76, which is 1,530. Again, if you’re going to get this 99 it’s really only designed for the Levitator boards, which allow you to get that track and move the center of lift further forward. But it does make everything easy.

If you want to teach your friends, if you want to be able to go in the lightest winds, do some dock starting and pumping, or just have a really easy time behind the boat and be able to ride the smallest ripple, this Infinity 99 is really amazing. It’s total training wheels. The 76, is your all-around go-to wing. If you could only have one wing, it would probably be the 76. If I wanted to jump, I’m always going to go for the Infinity 65. That’s my personal favorite.