Late last season four of our European team riders took part in an online video contest “Crafted Seconds” Presented by Sessionismore & Nissan. The contest consisted of seven hand picked riders that were given four months to film a 100 second video part with a videographer of their choice.We were stoked to see four of the seven spots filled with our team riders: Leon Illenseer, Samy Kautner, Katinka Buiting and Philipp Burkhart. Each of these riders worked hard and put it all on the line to create a video part that they were proud to stamp their name on.

Filming a video part with a limited amount of time takes a lot of hard work, planning, organization and most importantly a good crew. All four proved they have what it takes to film a great section which is why we wanted to share these with and also give you, our viewers the chance to learn more about these hard charging Euros.

Leon has been putting out tons of great content over the past few years. But his video section in this contest definitely takes the cake. His effortless style and fearless approach to urban spots was a pleasure to watch, apparently the judges agreed when they placed him in the top spot of this years “Crafted Seconds”. 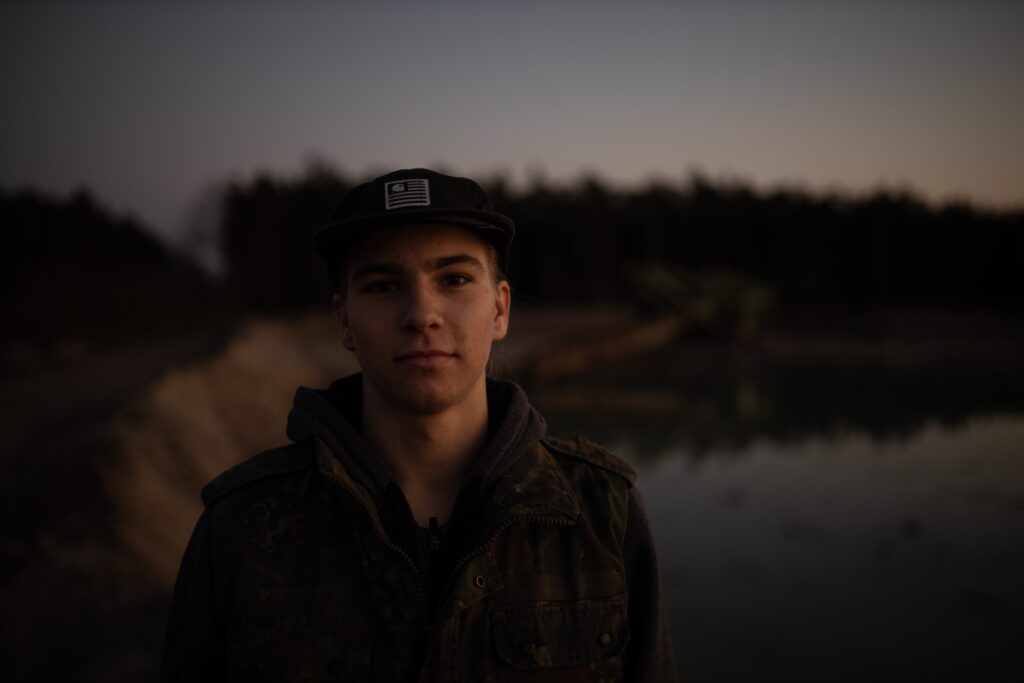 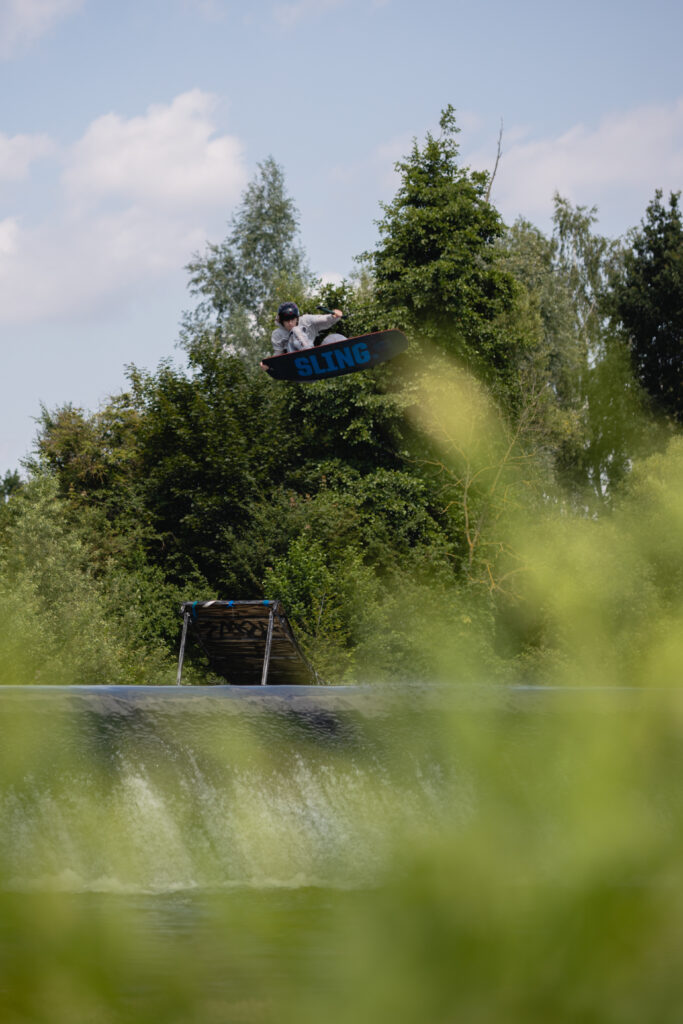 We have a bunch of full-size Cable parks, especially in Germany. Maybe because Sesitec and Rixen Headquarters are located in Germany. I think they do a lot more advertising her as well, which I think is one of the main reasons.

Well, I think I would probably spend all my time in the garage building badass cars with my dad!

If you could steal one trick from any rider, what would it be and which rider?

Butter Slides or back 9’s?

What a question haha. Butters are my favorite thing to do on the water for sure. But back 9’s with some tweaks can be really cool as well.

I really like how the Coalition and the SpaceMob boots match up from 2021 and it’s the most buttery board in the lineup. Plus the graphic this year is a VIBE!

My favorite part was definitely winching with the crew throughout the project. It really was a lot of work to get it done but man we had a blast!

One of the most gnarly girls on the scene. Not only charging at, but sometimes charging through any feature in her way. Katinka’s riding was widely respected in 2020. We can’t wait to see what she gets up to during the 2021 season. 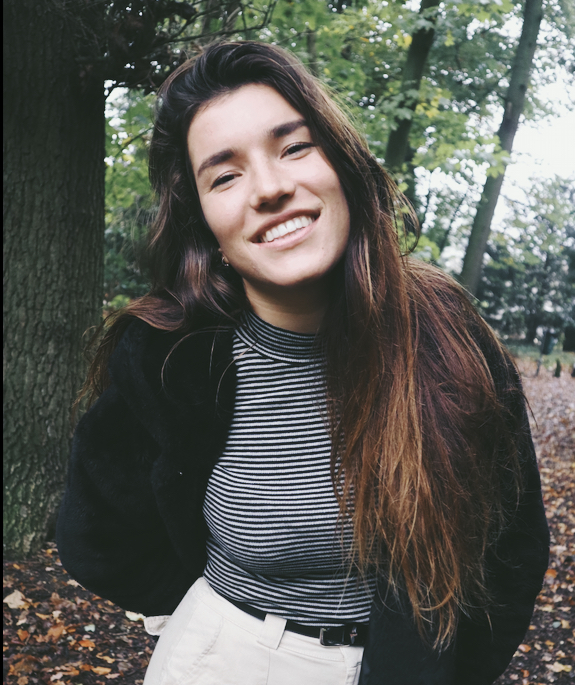 Europe seems to have one of the biggest wakeboard scenes in the world, why do you think that is?
It definitely varies throughout different in countries Europe. But I guess you could say the cable wakeboarding scene is big in Germany and France, recently in Baltic countries as well. Which is quite strange since those are definitely not the warmest countries in the world. Maybe because with the cold a lot of people snowboard in winter and they want to stay on a board in summer?

Also, people in Western Europe can generally afford to pay for wakeboarding. The area is densely populated, so there are always a lot of people close to cable parks, all potential wakeboarders.

That’s a hard question. Just watching lots of Netflix haha. Before I started wakeboarding I was dancing competitively, but I doubt I’d still be doing that. I’d probably be snowboarding and surfing more. I love both, and snowboard on an indoor mountain (fridge) here in the Netherlands sometimes.

If you could steal one trick from any rider, what would it be and which rider?
I guess I’d rather steal someone’s style than one trick. For example Shocky (Jonathan Silvershats) has a style that I’d love to steal, he makes everything look sooo easy! If it has to be a trick, probably Crosse’s grabbed roll to blind, it looks so effortless and he can do it off everything pretty much anything.

Hahaha neither. I love hitting rails and especially love the feeling of landing into banks. Way more than boosting of kickers or doing butter slides. Although sometimes a kicker session can be good.

This season I’m going for a Volt and RAD’s or maybe SpaceMob boots for winching. Last season I rode the Volt as well. Back then I ordered it without being able to try it, only after reading the specs in the catalogue. I was super nervous if I was gonna like it or not, but It turned out to be the best board I’ve ever ridden, so of course this season I’m not changing! What I love about the Volt is that it’s super light. I like to ride a medium or bigger sized board, but sometimes big boards can get a bit heavy, which can be hard if I’m trying really quick and jumpy tricks. The Volt is so light that this is never an issue  Also, I love the flex-tips on features and the stiff belly makes for great pop on ollies. It just has everything!

My favorite thing about crafted seconds was that it pushed me to film and learn new things. My home-cable Burnside Cable park allowed me to film before opening hours one morning. It was a lot of fun to be able to customize obstacles and try different combinations. Somethings that they are normally not okay with.  I was looking for different ways to customize obstacles as soon as I new I was taking part in the event. If I had to narrow it down to a single favorite…The wheelbarrow on the flat bar turned out to be the most fun.

One of the few European riders that spends as much time behind the boat as he does lapping the cable. Philipp’s versatility, style and creativity rarely go unnoticed. 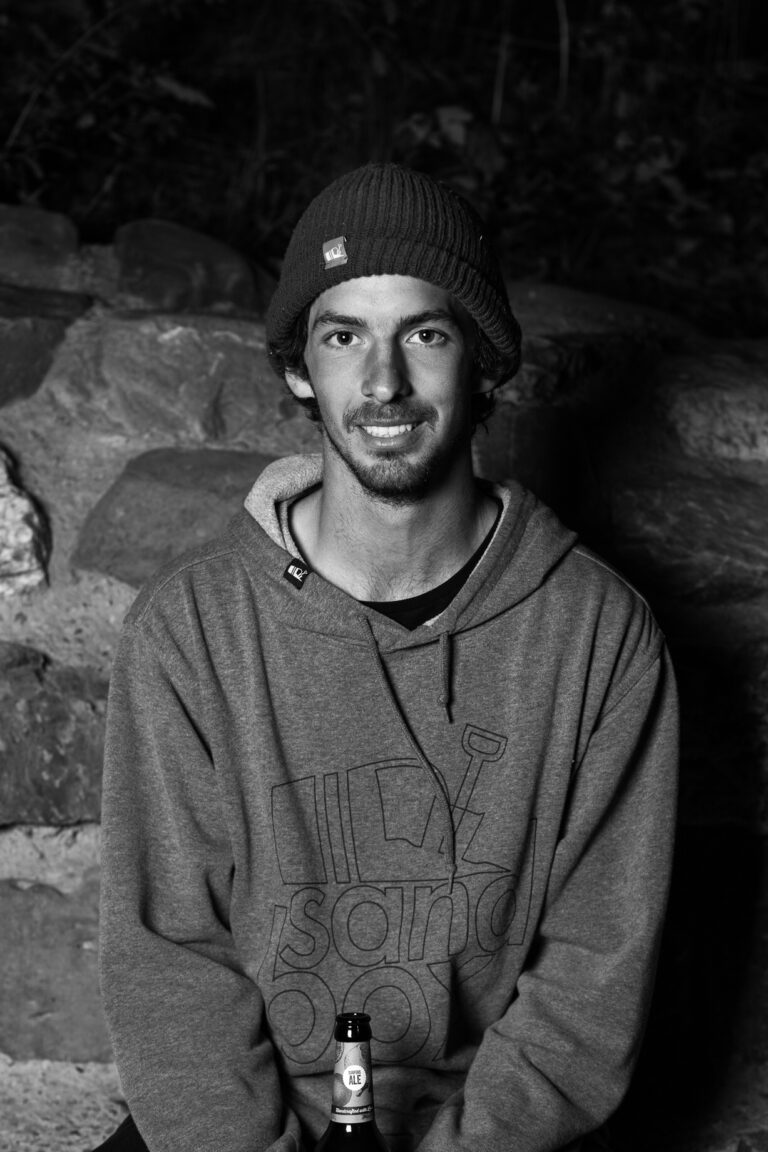 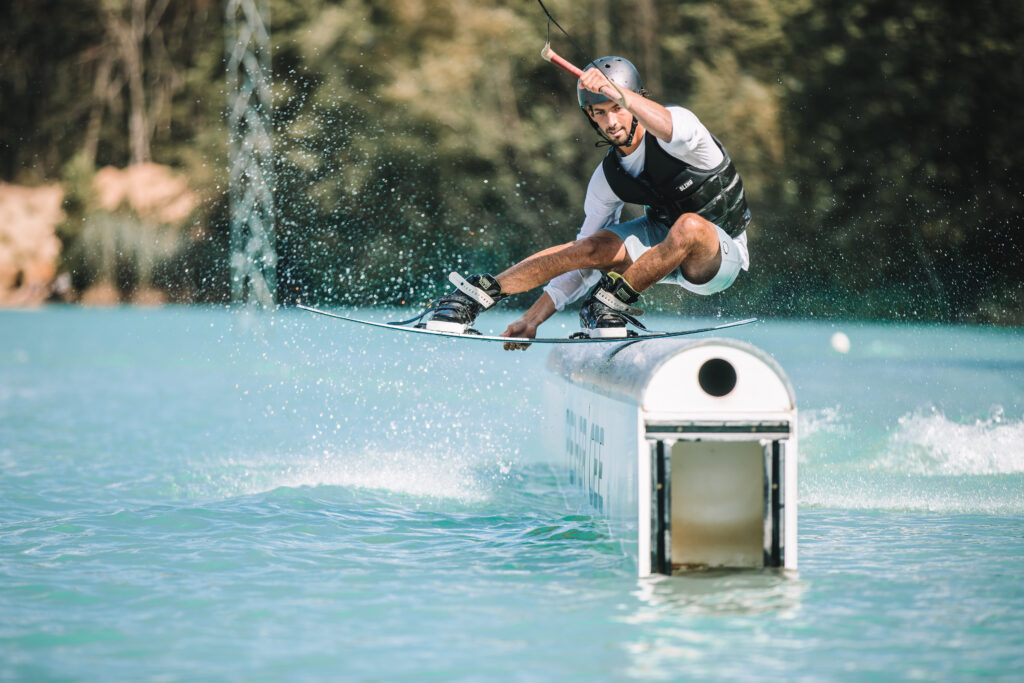 Probably because cable parks were a German invention. At this point I think we have more than 80 full-size parks and all of them are sick in their own ways. So wakeboarding is just easily accessible and no matter where you live in Germany there is always a park somewhere close by.

If wakeboarding didn’t exist, what do you think you’d be doing instead?
I don’t really know what I would do if wakeboarding didnt exist. I guess I would still live in my old hometown and would skate a lot more, still do judo and might go to a university.

If you could steal one trick from any rider, what would it be and which rider?
I think I would steal Alex Graydon’s Anti-Method backside 180. That trick looks so sick but I just can’t figure out the grab.

Butterslides are a lot more fun.

Which Slingshot set up are you rocking this year and what do you like about it most?
I’m riding the 150 Native with Spacemob boots. The board is good on edge but still has a loose and playful feeling. It has amazing pop both behind the boat and at the cable, the landings feel nice and smooth! I’ll be riding the Spacemob boots this year and I’m super excited to try them!

What was your favorite part of Crafted Seconds?
My favorite part of crafted seconds was for sure the film sessions at the cable. The support and quality time with the whole crew at the dock + a few beers after filming. I’ll definitely remember the good vibes during this project!

Regardless of whether he has a snowboard or wakeboard attached feet, Samy has the ability to make even the most difficult tricks look like a walk in the park. Which is why we weren’t surprised to see him land a spot on the podium of Crafted Seconds 2020 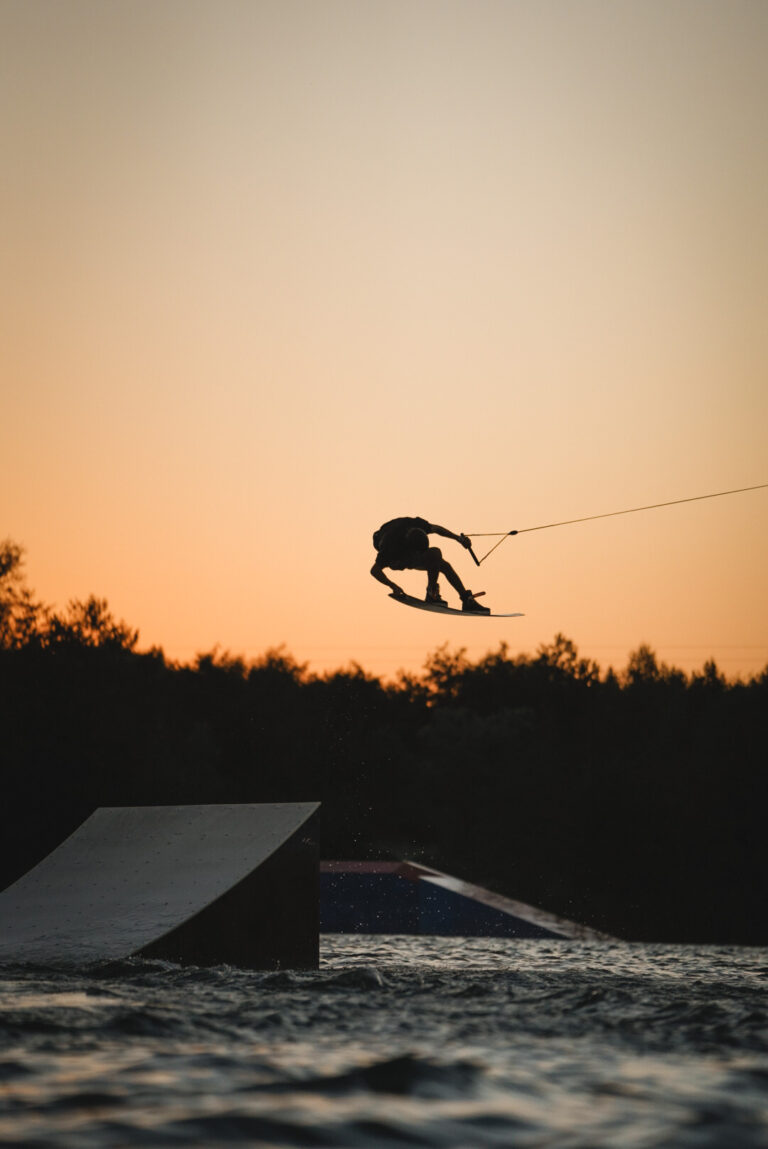 That’s a difficult one! Maybe because cable parks were invented by a German and the main location for cable manufacturers like Sesitec or Rixen is over here. That could be the reason why cable wakeboarding got so popular in Europe. I know that our cable @wasserskiliftallgäu was a hotbed for good riders like P2, Patrick Viererbe, Jan Sauer who I looked up to back in the days. I still have their movie TICKET at home. I think videos like that definitely contributed.

If wakeboarding didn’t exist I would maybe find the balls to skate more or I would move to a place where I could surf every freaking day.

If you could steel one trick from any rider, what would it be and which rider?
Literally every trick Crosse Bearden does. I really dig his style and creativity. Every Clip of him gets me hyped on wakeboarding.

Depends on my mood I would say. Sometimes I am super  motivated to go big  and sometimes I do butters the whole day. Both are nice and fun.

Which Slingshot set up are you rocking this year and what do you like about it most?
I’m riiding the VOLT 158 and RAD Bindings. I like the size of it, its as long as my snowboards which gives me a little snowboard vibe. It’s perfect for big rails or kicker hits and has super  soft landings. Oh and it’s Steffen Vollert’s Pro-model…That explains everything right?

What was your favorite part of Crafted Seconds?
My favorite part was actually the time off camera. I had some tricks in my mind for the whole summer and the process of getting closer and closer to doing them was fun for sure.  Then to get those tricks on film was so rewarding. All these moments with my homies who helped out a lot, or gave me a place to crash for the night. For example, one night we had a little sit-together at our home cable with some beers, slept in our cars and woke up at 6AM to get some morning shots. Everybody was hangover, you should have seen all our faces haha.