Space Skate 65– The Space Skate 65 wing is perfect for learning how to foil. With its extremely low take off speed, beginners are able to use a small kite and have less power. This wing also makes managing your speed once you are foiling easier and therefore safer.

Apollo 60 – The most well rounded wing in the hover glide range. With equal parts lift, speed, stability and turning, the Apollo is ready for anything you can throw at it. Perfect for going quick, carving, as well as learning all the latest tricks and fancy foot placement. 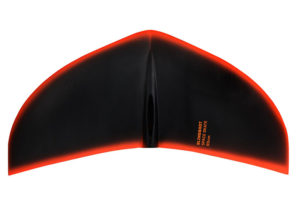 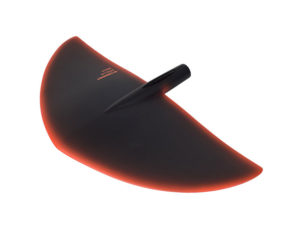 This first foil board is the Dwarfcraft 3’6” Micro.  It is one of our more popular boards, especially for somebody who’s a little bit more comfortable foiling, it is short at 3’6”. It is also a lot thinner and more low profile than our normal Dwarfcraft 3’6”. The size makes it easy to travel with and easy to manipulate in the water with your hands. It is a really fun board that Fred Hope, our team rider, shreds. It’s Fred’s favorite board and mine as well. For 2020 the EVA grip was changed to a more corduroy texture that is one direction. It is very grippy yet soft and comfortable when you are doing tacks and jibes and moving around the board. The elevated back foot pad is also great for tricks.  And then, let’s get down into the magic bit. Yeah, the magic. This is the Hover Glide foil system and this year we are keeping the package set up with the Space Skate 65cm wing. It is called the Hover Glide Fkite package.

For 2020 we have a new aftermarket wing that you can buy for your Hover Glide set up called the Apollo 60 cm. This wing is really, really great. It’s an evolution of our Infinity wings from the surf foil line. It is a smaller version that’s been tweaked for really great kiteboarding performance. This wing is really, really quick, really, really stable and has great maneuverability. It’s one of my favorite foil wings that we’ve ever made. For Slingshot fans that are familiar with our Carbon Ghost Whisper foil line you may know the 633 wing. We could not keep it in stock it was so popular. The Apollo 60cm is the Hover Glide version of that coveted wing.

The wings have come so far. I can’t believe how stable yet fast it is. When I first started to foil, it was like you either had a big, slow, stable wing that doesn’t go very fast or you had a fast, wing that’s kind of twitchy and hard to tack and jibe. Now Slingshot has found the magic combination. For people who know, like the original Hover Glide wing, the H5, this is even faster and bigger. So, the Apollo 60cm is faster, more stable, but still has plenty of performance and turns even better.

The Dwarf Craft 4’6” is one of the most popular foil boards we make. It’s probably the most perfect blend of size and performance. For somebody who’s kind of an intermediate, this is going to be a great board for them. You can even learn on this board. It’s kind of a Jack-of-all trades an all-around good shape for the bulk of the kiteboarding market. So if you’re somebody who’s interested in foiling you will get a lot of value out of this board because you can potentially learn on it and then you’ll probably never outgrow it. It also has the new corduroy Eva grip. This board combines with the Hover Glide FKite package and the Space Skate 65mm wing. For absolute beginners this set up thing is extremely stable, and can foil at really, really low speeds. If somebody’s getting into foiling and they’re a little bit scared of having too much power or flying out, they’ve heard horror stories or you know, they’ve seen scary images or something like that, this is going to be the wing that’s going to make sure that you learn and progress safely and in a friendly manner. That’s really what we’re all about at Slingshot, especially in the foil world. We don’t want to alienate anyone. We think foiling is for everyone. The Space Skate 65cm is the perfect solution for somebody looking to learn how to foil.

Remember to visit the Foil Academy for more tips and tricks!