Posted at 23:31h in Kiteboarding by Elliott Tauscher

The 10th anniversary of King Of The Air (KOTA) ran Saturday November 26th with gusts clocking more than 50 knots—the strongest wind ever recorded in KOTA history. For Slingshot rider Jeremy Burlando and myself, this was our first time coming to Cape Town, South Africa and experiencing KOTA. We were both impressed by the massive number of fans that came to watch and support the top 18 big air kiteboarders in the world.

In the two weeks prior to KOTA, we got extremely unlucky with wind and Jeremy didn’t have a single day of training over 25 knots. Translation: Jeremy had not seen Cape Town properly on. As we drove from our rental house to the event, the cloud over Table Mountain was in full swing, the wind forecast was looking perfect, and we knew today was going to be different. You could feel the excitement—from the riders to the staff to the crowd, everyone was fired up and ready to see what these professional athletes would bring in such extreme conditions.

The riders meeting started with an announcement that this would be the windiest KOTA event in history, and the organizers planned to take advantage of record wind conditions by running the event all the way through in one day and the 2022 King of The Air would be crowned that evening. 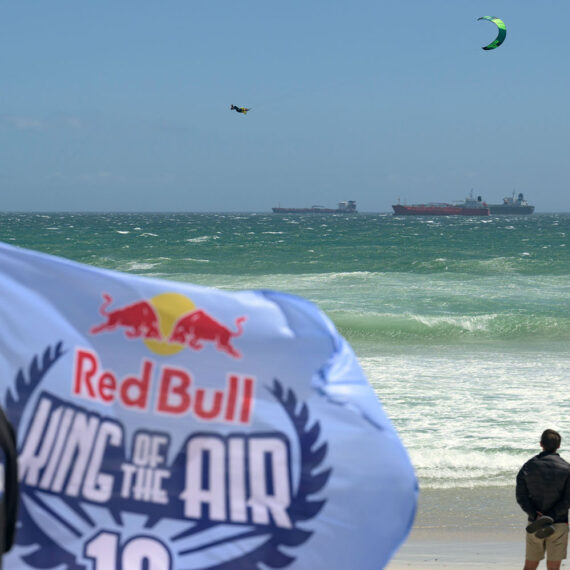 Jeremy’s first round matchup was against Stig Hoefnagel and Edgar Ulrich. Jeremy went out on his 8m Code and immediately put together a stunning combo of tricks: a massive kite loop triple front roll board off, then a contra loop quad front roll tic tac, and a contra loop quad back roll board spin. He then swapped to his 6m Code and threw down a massive double kite loop and a double kite loop back roll to place himself second in the first heat. Watching from the beach, I was in awe of how well Jeremy, a 17-year-old competing in his first KOTA, was riding, doing tricks I could not even wrap my brain around let alone try to name (or even properly hyphenate for this report!).

Jeremy came off the water excited that he stomped the tricks he had been working so hard to master and would be advancing to the second round to compete against Giel Vlugt. As the heats continued and it got closer to the second round and for Jeremy to get back out on the water, you could see and hear the intensity of the day start to escalate. Unlike the first heat of three, this next heat was one-on-one, all or nothing. If Jeremy won, he moved into the third round; if he lost, he was out of the event completely. Jeremy has been in a lot of comps and won a lot of comps, too, but KOTA is just different—it’s the most stressful and high-level event in kiteboarding. But Jeremy has taken his riding to another level this year and I knew he was more than enough prepared and had a bag of unbelievable tricks he hadn’t even uncorked yet.

As the second round began, the wind was gusting in the 40-knot range and Jeremy was eager to get back on the water with his 8-meter Code and go the biggest he had ever gone. The horn sounded and the green flag went up. Jeremy was first to a kicker and sent a massive kite loop double front roll board off. The crowd went crazy, and we thought, “Here we go… Jeremy is ON.” Then Giel threw a massive double kite loop late back roll. This was going to be an epic battle between the two. Unfortunately, the nerves and lack of training in Cape Town got to Jeremy and he crashed three times in a row on over-rotations, once losing his board for a few seconds toward the end of the heat. And, bam, just like that Jeremy was knocked out of the King of The Air.

As he came off the water, you could see Jeremy’s disbelief and disappointment. As he landed his kite and the reality of getting knocked out sunk in, the frustration towards himself kicked in. Jeremy needed some time to himself, away from the crowds and other competitors. As Jeremy sat in the car with myself and Slingshot teammate Kimo Verkerk, he decompressed from his elimination and slowly came to terms with what had happened, isolating and identifying his mistakes. In this moment, through all his disappointment, Jeremy was able to learn from the experience. I was shocked by how mature and levelheaded this 17-year-old was. For Slingshot and myself, we have never been prouder of Jeremy. As he decided it was time to pack up his gear, I tried to help him remember this moment and learn from his mistakes, but also that this is only the beginning for him. 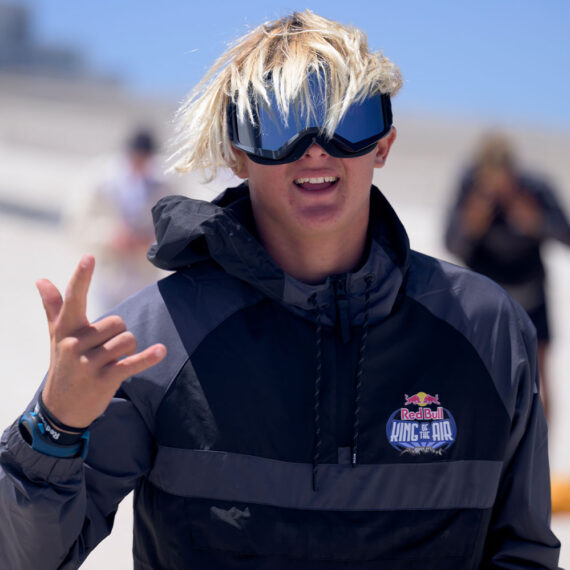 As the event kept going, Jeremy watched as his two close friends, Lorenzo Casati and Andrea Principi, advanced to the final. Jeremy was front and center on the beach to cheer on his two Italian friends as they went the biggest KOTA had ever seen with kite loops more than 30 meters high in wind gusts over 50 knots. As the two came off the water, Jeremy was first to congratulate Lorenzo, who had just become the 2022 King of The Air. I cannot imagine the feeling of excitement mixed with the disappointment he felt at this moment. Jeremy is a competitor to the bone, and he wanted to be in that spotlight. But today it was not him, nor his time—it was his best friends.

As the sun set and all the emotions of the day started to subside, Jeremy’s motivation began to return and so did his talk of training harder, going bigger, and coming back next year with vengeance. Jeremy’s journey as a professional kiteboarder has just begun and I’m beyond excited to see what he can do and where he will take his riding. I have never been more proud and more excited to be a part of Jeremy’s journey and I hope you are, too.