THE FOLLOW UP INTERVIEW – Summer, We HOPE with Fred Hope and Kaden Sponhauer

Fred Hope and Kaden Sponhauer sit down with Slingshot Brand Manager, Alex Fox, to talk water sports in the Columbia Gorge, Videography and life in your 20’s.

AF: Great work on the film guys! Are you stoked with how it came out and the response?

KS: Yeah, it’s been awesome hearing from people around Hood River. I’m stoked so many people were able to see it!

FH: Hell yeah! Super happy with how it came out. Kaden did a wonderful job as always of knocking out the clips and putting it together. I really enjoyed this edit because of how broad it was in its disciplines. Last years was only foil on 23m lines. This year pretty much everything except for garage sale items were filmed on (Garage sale kiting coming soon). I have found myself using what I’ve learned on the foil to help me in other disciplines and vice versa. The different riding style can bring out different tricks that I had never thought of. This summer I have probably spent more time on a surfboard than foil and much more time on a twin tip vs last year. 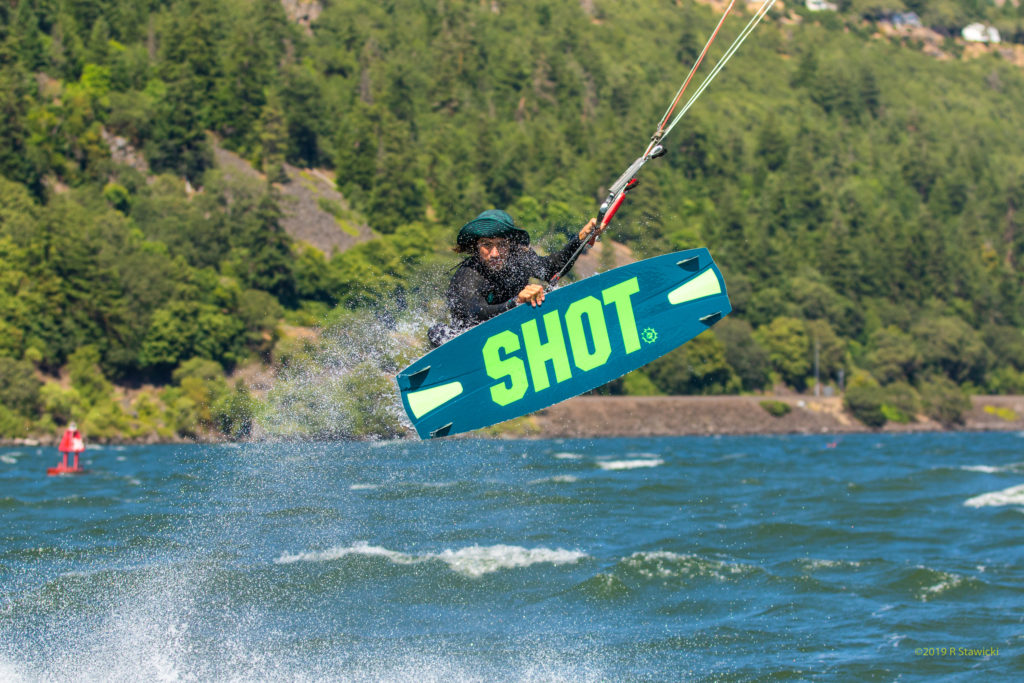 AF: Awesome. Yeah, we have had great feedback! It’s cool to see what you guys have done in such a short summer season. When can we expect the next one, haha?

KS: This was a windy summer in Hood River so we were able to do a lot of filming. We should have more coming out this fall! There are also exciting plans for this spring.

FH: I honestly have no idea. Both this year and last, we filmed for two days then Kaden had the edit ready by the end of the week. We’re always enjoying kiting so much that we forget about the job we have to do. It seems like every summer towards the end we realize how much filming we missed out on, but also how much fun we had. I’d say next years will be a new take on the sport with incredibly strange contraptions and kites everywhere…. 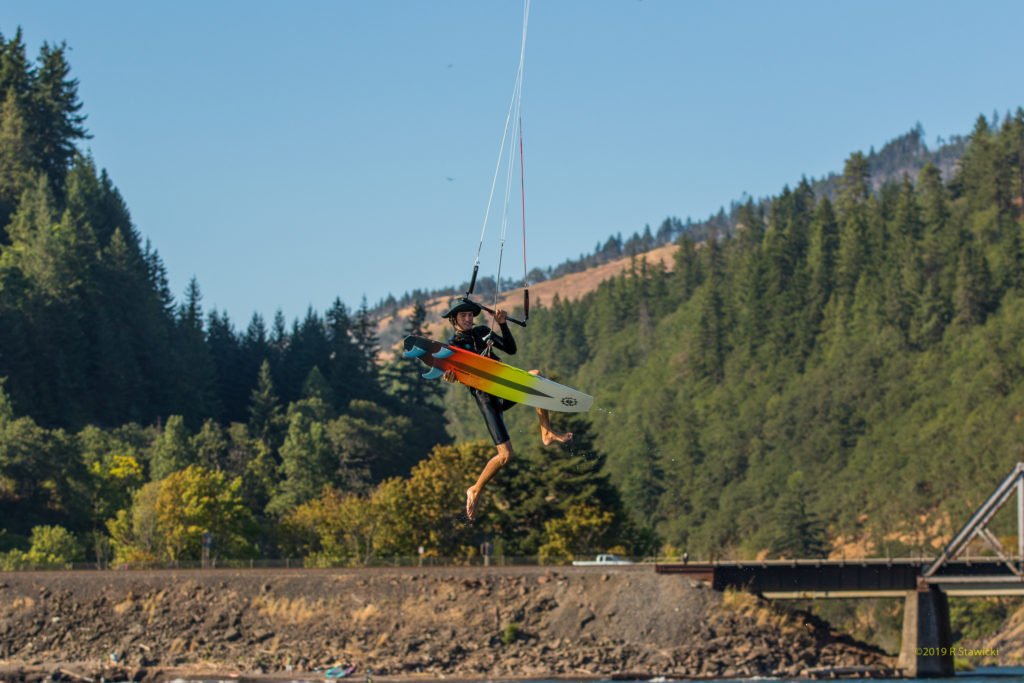 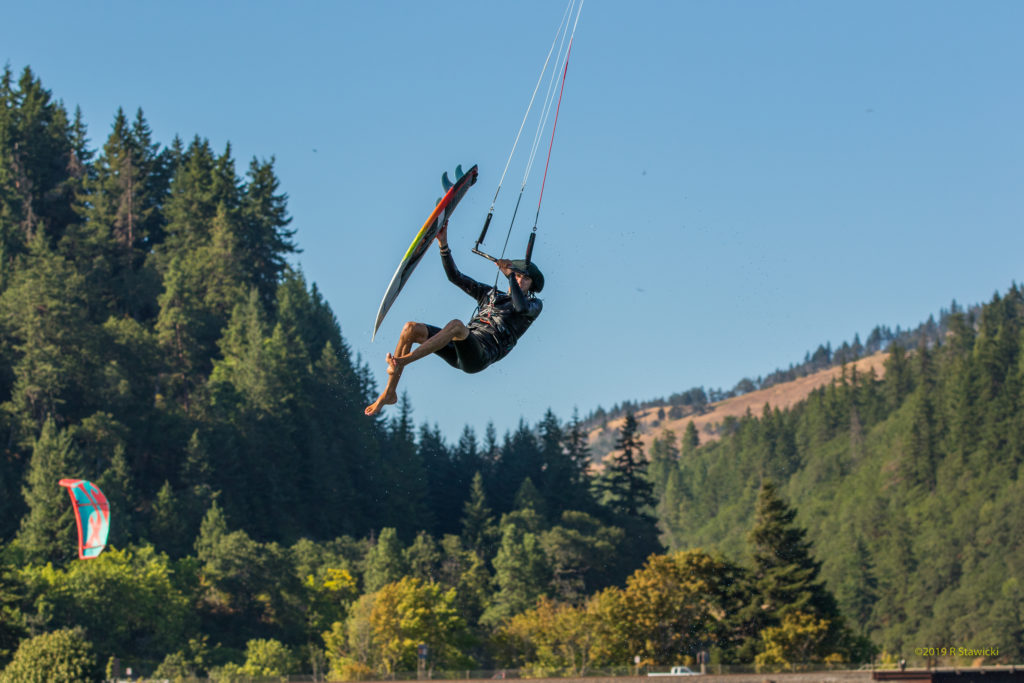 AF: I was telling Kaden that you don’t see many people in Hood River shooting kiteboarding from the water. You kind of see it down in the park, but we have seen a lot of that scenery. That was the first thing I noticed with this footage. Was this something you guys planned?

KS: Shooting from the water definitely adds a more unique look to our videos so we try to do it as often as we can. It’s also way more fun to get in the water than to shoot from shore. In the park, the water is usually shallow enough for the cameraman to stand in the water, but where Fred, and most people like to ride, the water is a lot deeper and requires a water housing for the camera. A water housing can be really expensive, so I think that’s what mainly keeps people away from shooting in deep water. Luckily, I found a water bag I can put my camera in that costs less than $100.

FH: Yes. It is by far my favorite position to have the filmer be in. By shooting from the water, the viewer gets more of a sense of how it feels and all the little things going on at once. Last years foil edit was the first time someone had filmed me from the water and also the first time I truly felt that my style had been captured.

AF: I mean the second really obvious thing was that Fred wasn’t exclusively riding a foil. I think everyone in Hood River and La Ventana knows Fred can ride everything but I think this is the first time that it was really put on display. Was that focus for both of you guys?

KS: Yeah we had never really done much filming with anything other than a foil until this summer. Usually when it’s too windy to foil I like to go kite, so we never get any footage of Fred riding surfboard or twin tip. I hurt my ankle this summer, so I had more time for filming, and after one session with Fred on the surfboard we had to do more. The new gear this year is so sick too we had to try it all!

FH: Yeah that was definitely the focus. Sure, I’m the foil kid and that’s super great, but I don’t want to be tied down to that. Every discipline is fun and keeps the mind open to new ideas. Sometimes while foiling it becomes hard to think of something else to try. Jumping on a surfboard, I can watch Reider Decker or Matchu Lopez defy what I thought was possible and gives me something to shoot for. I wouldn’t consider myself riding a twin tip to be showing off… I’m working on it, but I’m still pretty rusty.

AF: Is one of the disciplines harder than the other to film for you Kaden? I can’t imagine an “around the world” is super easy to film, haha? Also probably not the easiest trick to do going around someone either huh Fred?

KS:  Twin tip is probably the hardest for me to film in the water. I can’t zoom in or out when the camera is in the water housing so when Fred does a big jump he can get too far away for the shot to still look good. The hardest part about filming an “around the world” is deciding when to film Fred and when to film the kite. People want to see that he stays on a foil the whole time but it’s also important to see what the kite is doing. Foiling is definitely the most dangerous to film. As you know Fred rides really fast and likes to come very close haha. I always make sure my arms and legs are in when he rides by.

FH: I’ve been searching for a helmet sponsor for Kaden for a while now, haha. If anyone reading this works for a helmet company email me. I don’t think I’ve ever hit Kaden but it’s been pretty close. The around the world isn’t that bad. Sometimes the kite will land on top of him, but we always end up laughing as it tumbles downwind. 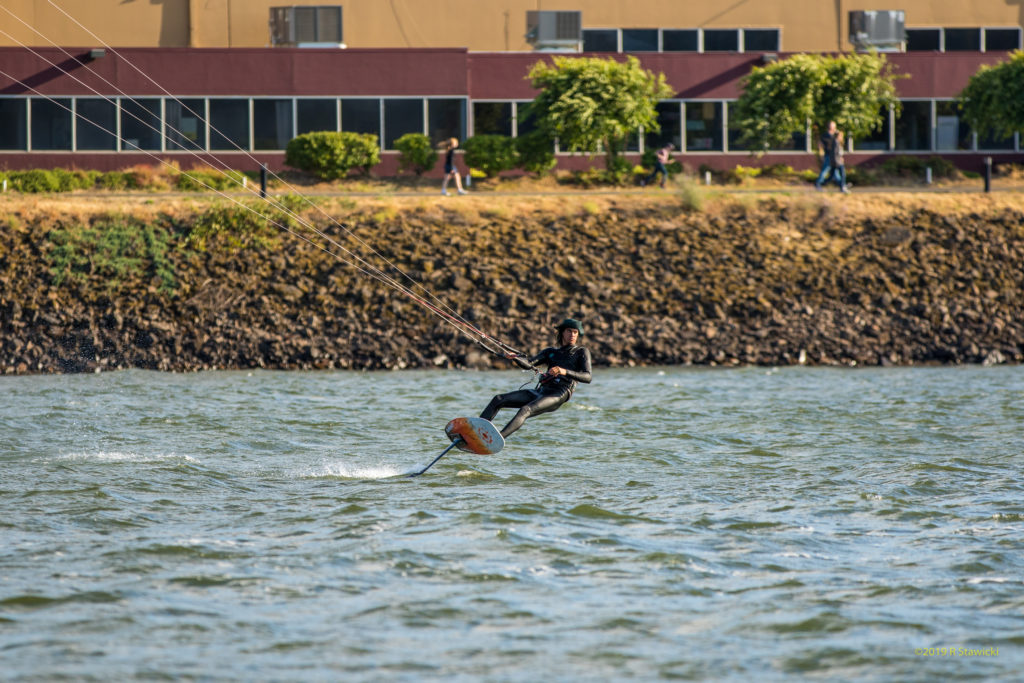 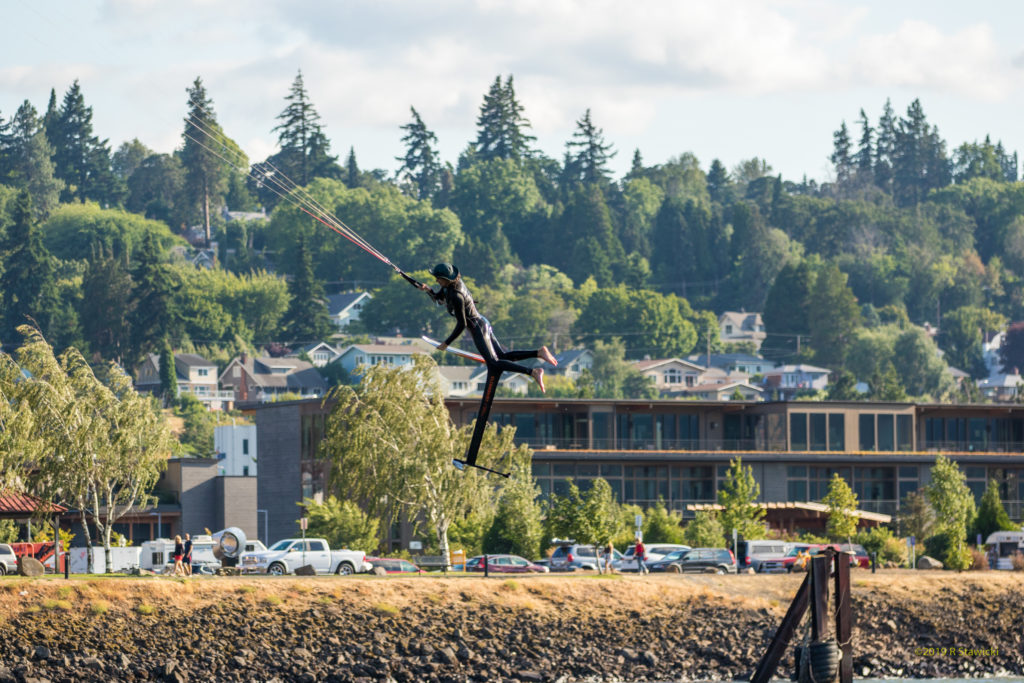 AF: So this summer, to last summer. Does anything stick out to you guys? Kaden, has it been easier to film Fred this summer as opposed to summers past? I’m really asking about how much Fred has improved… He seems to land 90% of the stuff he tries now.

AF: Wait, so how long have you guys known each other? Seems like a pretty great friendship. Who’s the lazier one out of the bunch?

KS: I met Fred when I was first learning to kite at the event site around 7th or 8th grade, so about six years ago. We’ve been filming and traveling together ever since.

FH: We probably started hanging out in 2016? I had just started driving so I’d always be at the event site. I don’t know if one of us is lazier than the other, but not saying we aren’t. Just wait until a 95-degree day at 3-mile to find out.

AF: So Fred, we saw you ride lots of different kites in this video. I think in total 4 different models right? Can you walk us through why and what conditions you choose to use them?

FH: The more the better! But actually, it all depends on the amount of lift you want and certain amounts of slack. When I was riding the new Rally GT, I was looking for a high amount of lift with quick shut off. This is great for front rolls and tricks where you want to be a little higher off the water. I have actually found this kite to work great for all disciplines and think if Sam only lets me get two kites next year, I’d choose two Rally GT’s (please don’t do that Sam). I was riding the SST while foiling because of my strapless foil tricks, lift is not so much your friend. I need a kite that reacts quickly but won’t throw me off balance. The SST is great for this. In the video, I was also riding an RPM and a RAPTOR. The RPM shots were from a light wind morning way out east. I honestly love the 12m RPM because of how easy it is to control and its speed even though it’s such a big kite (for the Gorge). I like the bigger size RPMs over the GT because of an easier pull that shuts off a little better when the conditions are iffy. Later that day, the wind ramped up and we had 35 mph gusts coming through. The RAPTOR had just come out a couple days before, so I had to give it a go. I was very impressed. It’s a very different kite from the rest in the Slingshot line but very similar to the high aspect prototypes I used to ride back in the day. It took me a little bit to get used to flying this kite but once I figured it out, I was spending half my time in the air boosting over trees and exploring shallow marshes. 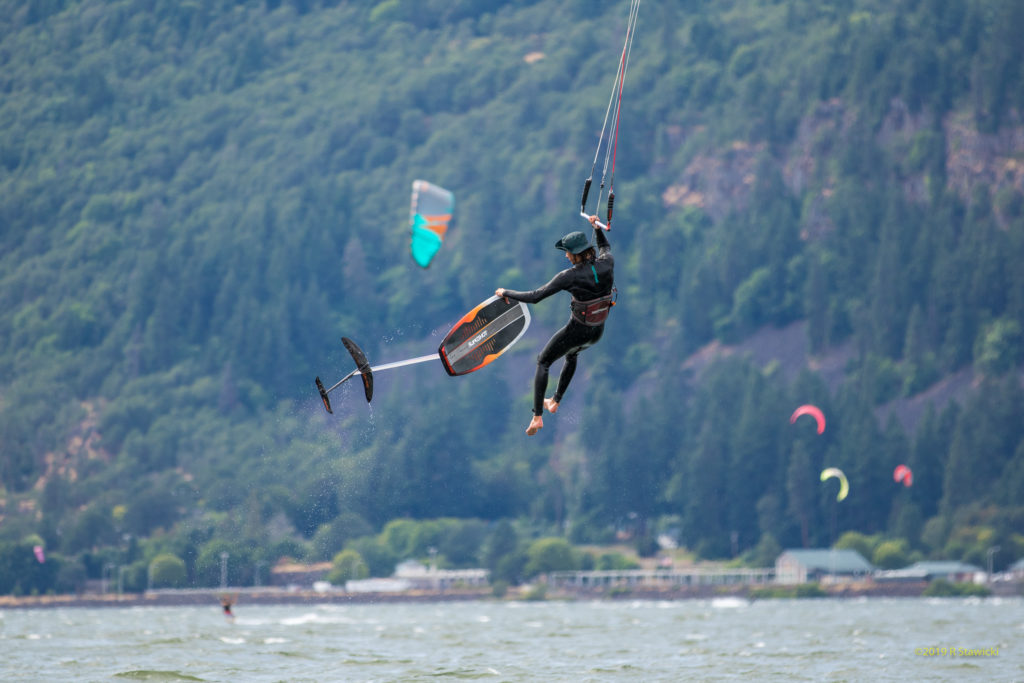 AF: So what’s next for the two of you? Please don’t tell me and all of the fans out there that you are waiting until next summer for another video. That’s not what we want to hear.

KS: We’ve got a couple more videos in store for this summer and a big trip planned for the spring. There’s no way we can wait until next summer either.

FH: While Kaden is off exploring South America this fall, I’ll be up in Seattle studying my ass off while it rains outside. I’m going to university but am planning on taking the spring quarter off to explore the west coast of Baja then hopefully head down to South America myself. I bought a van a couple weeks ago and have been tricking it out to take down to Baja. Now I just need to build Kaden a bed then he’ll have a place to sleep. The plan is to hit San Carlos, Abreojos, and La Bocana. Strictly waves spots, but there always other places in between to get our foil on.

AF: Good because I know that there are foilers all over the world waiting to see what’s Fred has coming down the pipe.

KS: Haha, you can expect a whole lot more than just foiling in our next projects!

FH: There is always a way to push yourself foiling. Looking back even a year or two ago, I’m surprised at how far I’ve come!

AF: Nice work boys! Tell everyone thank you for reading this interview. There is nothing more a bunch of 40-60 year olds like more than listening to a bunch of millennials having a conversation Hahaha. Talk soon!

KS: Haha thanks for reading!

FH: Thanks for taking the time to read this interview! If you have any questions or spots to check out, let me know. Sorry for slacking on getting the interview to you Fox, the van has been taking 100% of my focus.