The Ghost is our all-new, single strut kite for 2020—fully optimized for foiling but with performance characteristics and design features that equally shine in freeride and travel. To introduce the Ghost to the foiling and kiteboarding worlds, we talked with our kite line brand manager, Alex Fox, getting the straight dish from him on the Ghost’s design, performance, and optimizations.

Foiling, for sure, was the inspiration for developing the Ghost. With the incredible popularity growth of foiling, we’ve seen a lot of demand for a foil-specific LEI kite and so our initial development started down that road. People were using our SST kite quite a bit for foiling, and we knew we could optimize and evolve certain elements of the SST’s performance into a new kite that would be really amazing for foiling.

The goal of the Ghost was always to be an ultra-simple kite that stripped away a lot of the struts and construction elements that you really don’t need while foiling. The development cycle started in the foil-specific realm, but, very early on, as we started the testing the Ghost on all kinds of boards, including twin tips and surfboards—you can’t test a kite exclusively on a foil—we started noticing there’s a lot of really great freeride characteristics to the Ghost as well. Plus, as a single-strut kite, the Ghost packs down extremely small and has minimal weight, making it an ideal choice for kiters who travel. 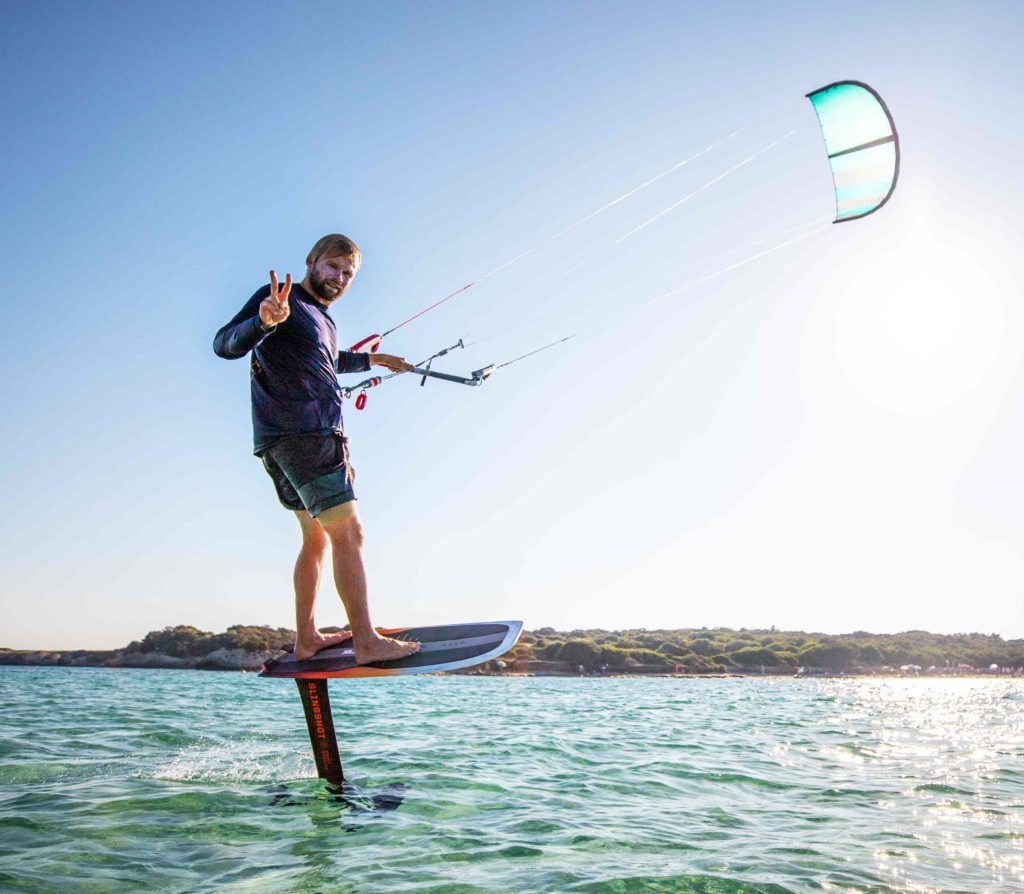 How has the Ghost been optimized for foiling?

But, we were also committed to keeping the Ghost extremely durable and structurally stable. That’s why we used our 4×4 Canopy Construction—it’s the stiffest and most structurally sound of any canopy material. The Ghost, compared to other one-strut kites on the market, is going to have virtually no flutter.

Why was eliminating flutter important?

When you go down to one strut, you lose structural stability, and a lot of that instability and flutter comes from blow-down. A kite that has less struts—or even no struts for that matter—you get a lot of blow-down, which is when the wind over the top of the kite pushes the canopy down. When that happens, what you feel is a lot of turbulence on the bar and that turbulence turns into flutter and vibrations. That turbulence also creates a lot of wear on the trailing edge of the kite as it’s getting beaten up, which obviously weakens your kite very, very quickly. That trailing edge is extremely important to kite aerodynamics because it harnesses the power. Without the trailing edge, without a tight canopy back there, you’re going to have a kite that loses power, isn’t really fun to fly, really indirect in the steering. 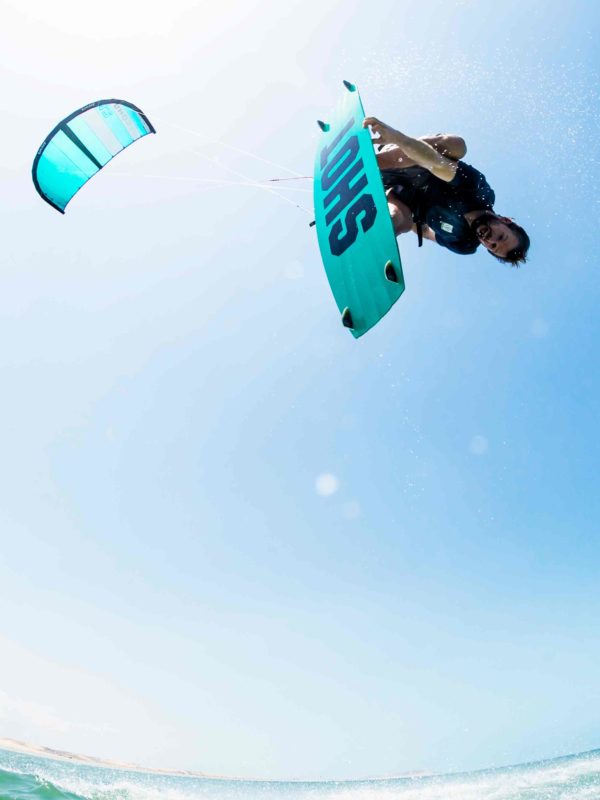 What’s another performance characteristic that you wanted out of the Ghost?

Turning and handling. When you’re foiling, handling and input response is really imperative because you’re able to get in these crazy angles where at times you’re really far downwind or upwind of your kite. If you oversteer or outrun your kite on a twin tip, you tend to fall pretty quickly because of the board’s friction on the water. While on a foil, you’ll keep going if your kite is fast. If you have a kite that turns faster and has more input and can really reef around, it’s really beneficial because if you get really far upwind or really far downwind—even if you notice it a second too late—you’re able to right that wrong, whereas on a traditional kite with a couple or more struts and a lot more construction details you probably wouldn’t be able to get that kite out of that situation.

The Ghost has excellent bar input—it has more direct handling on the bar, more feel. That’s something that we really talk about a lot here at Slingshot, because there’s other types of kites out there and when you fly them, you might not necessarily know exactly where they are. We have a really precise steering characteristic on all of our kites and especially the Ghost, which we’re really proud about because if you know where your kite is at all times you’re able to perform better on the water. If you don’t know where kite is, then you’re constantly second guessing it. Which erodes confidence, right? If you’re not confident knowing that your kite is going to be where you want it to be, you’re going to be doubting yourself and the kite and be apprehensive to try new tricks.

How important is the IRS Bridle System to the Ghost’s turning characteristics?

The IRS bridle’s bungee is a design innovation that we use exclusively at Slingshot and are extremely proud about. It’s also on our SST kite, but the Ghost’s is slightly different—it’s a four-point bridle and has an IRS bungee on the fourth LE connection, that’s the connection point that’s furthest down the leading edge, closest to the wingtip.

That fourth LE connection, that’s the one that’s responsible for a lot of lockdown but it governs the kite to make sure that it stays within its performance parameters. The IRS bungee enables your kite to have excellent response and handling at the edges of those performance parameters. If you’re sheeted out on the bar and the kite is pretty far to the edge of the wind window, that IRS bungee engages whereas a normal bridle attachment point is static. The IRS bungee will engage, so it can actually get input into the kite when other kites with a static attachment point wouldn’t be able to do so. That’s really important, especially with foiling, because you can get into some precarious situations where your lines can kind of slack. The IRS bungee on the Ghost enables the kite to respond quicker than a bridle that doesn’t have that feature.

It’s not just foiling, of course—the IRS bungee on the Ghost is beneficial to freeriding, as well. If you’re a freerider who loves to do downwinders, that’s going to be really great on the Ghost. You’re gonna be able to start in these upwind situations and if you’re down looping your kite a ton, you like to do carving transitions, go down wind, and also slash a couple waves, you want the Ghost because it can turn really fast and has that ability to pivot and really fire around. 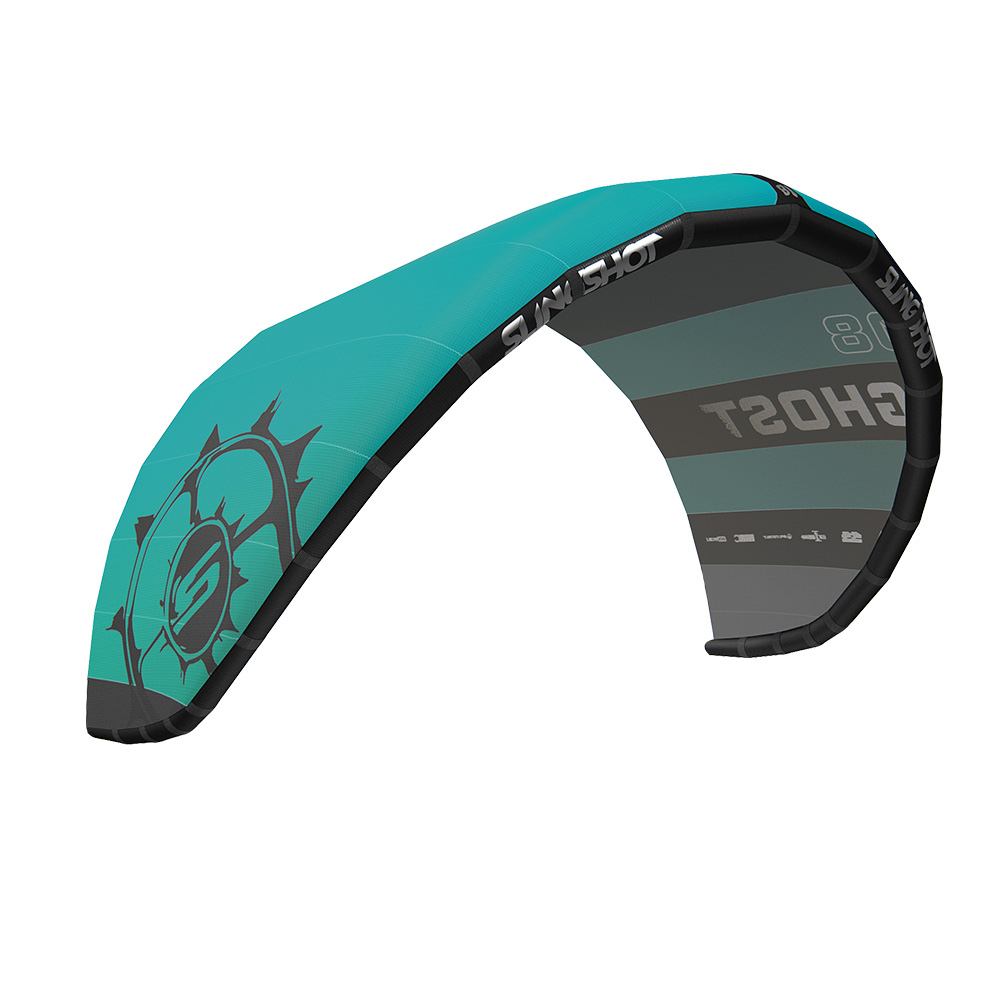 Where did the design of the Ghost’s Compact Swept C canopy shape come from?

When we’re talking about C shapes of canopies, that’s the amount of curvature of the leading edge. The more pronounced the arc—so the more C shape—the more compact it is. And by having a more compact C shape, the Ghost has a really tight turning radius. The Ghost has the compact shape C that is similar to the SST, but a little more open like the RPM and with a swept wingtip similar to the Rally GT. The Rally GT is our best freeride kite. The SST kite is our best wave and—before we made the Ghost—was our best foil kite. If you look in the middle of those two kites’ performance characteristics, you have the Ghost. 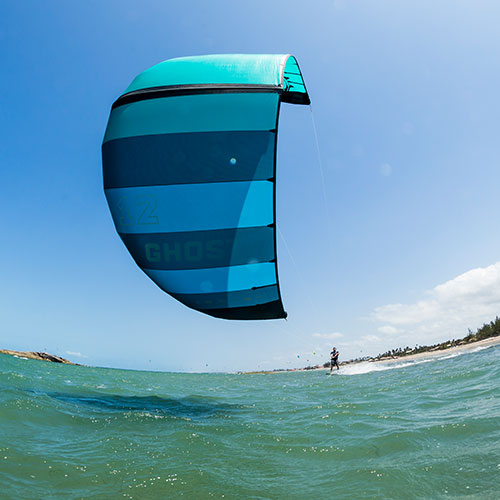 How do the larger sizes of the Ghost, the 15 and 17, perform in light-wind conditions?

When you remove struts and certain construction details, you get a lightweight construction that’s going to provide ideal light-wind performance. That’s why we have the 15- and 17-meter versions of the Ghost. Those larger sizes are pure powerhouses, and when nothing else is out there, the Ghost is excelling—with or without a foil. I watched Fred Hope foil in four knots of wind on the 15. That’s pretty insane.