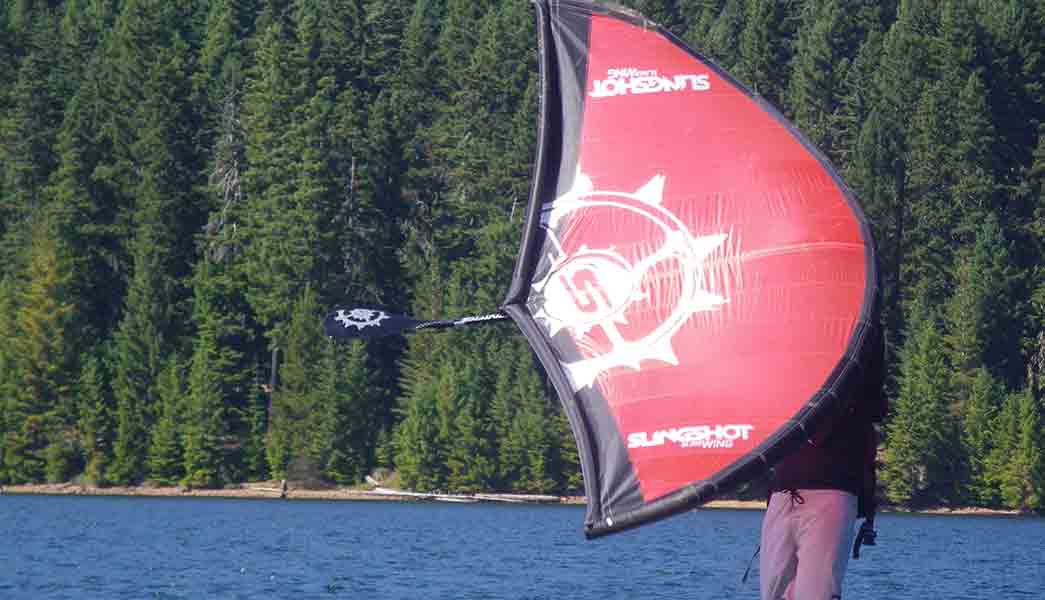 Top 5 questions answered about Wingsurfing and the Slingwing |2020 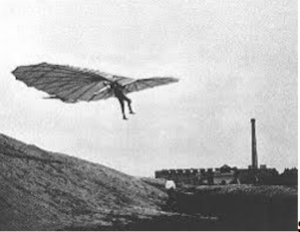 Some crazy dude with a ton of inspiration! There is nothing new about a handheld wing designed to pull you along, or even maybe trick yourself into thinking you will be able to fly! 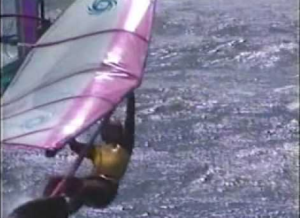 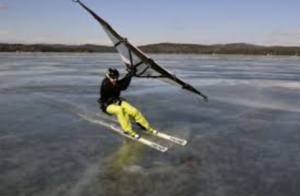 Foiling essentially eliminates all friction once you’re up and riding.  Being a pioneer and leader in all things foiling, we knew someday soon larger wings with more lift and better riders would evolve to a point where a device like the Slingwing would have a place. Like a lot of things Slingshot and designer Tony Logosz has created over the years, the Slingwing was simply ahead of its time. 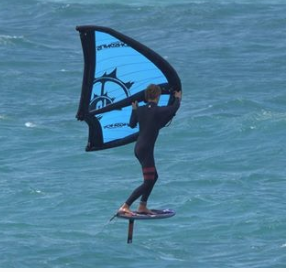 The Slingwing is a single-strut inflatable wing Slingshot first developed almost ten years ago and is officially launching to the public this summer. The wing is symmetrical from end to end and is aerodynamically designed to fly weightless like a giant paper airplane when held horizontal into the wind and to provide propulsion when engaged properly. 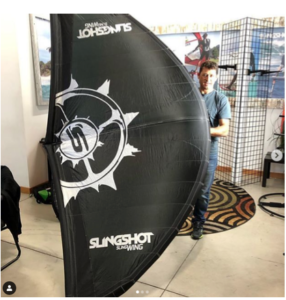 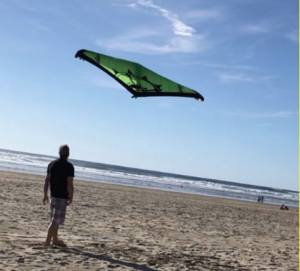 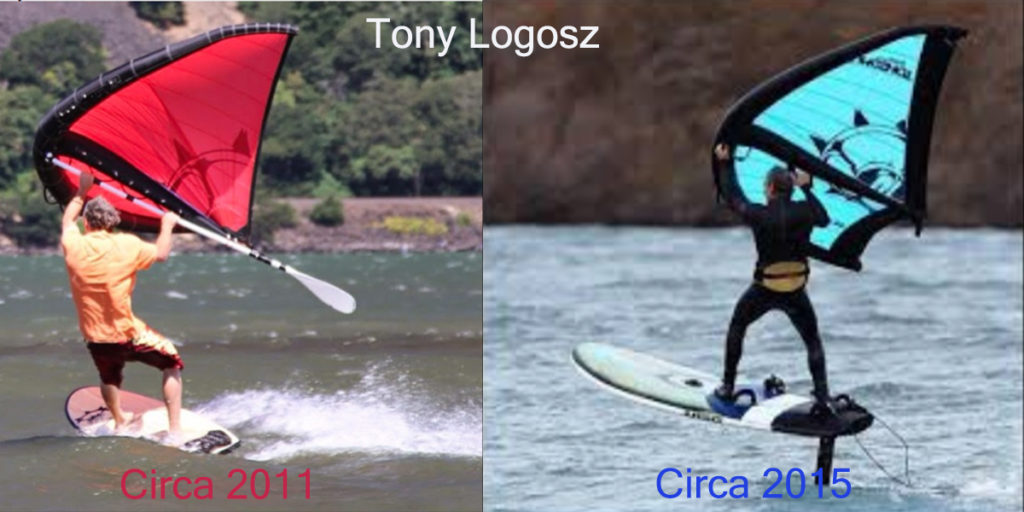 Born in the Gorge and coming to Slingshot dealers around the world soon. We expect the first production models to hit the water Summer 2019. To get on our mailing list for more information about when and where the Slingwing will be released, you can sign-up here.

You need a board with enough volume for you to stand on without sinking.

Outwit foil board matched with the Hover Glide FSUP package.

Match a foil board with a hydrofoil big wing – ideally, one designed for surf of SUP surfing. We recommend the above Outwit board with the Hover Glide FSUP package.  As you get better, you can start experimenting with different wings.  See our WING SELECTOR HERE for more info.

Stand on the board your back to the wind and the Slingwing in your front hand. When you’re ready, grab with your back hand and, sheet in and engage the wing into the wind. As you pick up speed, pump your board a few times to get on foil and off you go. It’s really is that simple. When you want to disengage the wing, simply sheet out or let go with your back hand altogether and it floats in the wind with essentially no resistance. Transitions take a little hand-to-hand coordination, but it’s honestly very simple to figure out.

Why a rush to market is bad for YOU.

In the water sports industry, there are typically two types of companies.  Inventors/innovators and fast followers.   We have already seen four “me too” versions of the Slingwing hit the internet recently.  New products and new categories mean companies tend to rush to market to claim their stake. This is risky for the consumer. A copy of a copy is just a copy. It does not mean the company or the developer knew exactly what the context of the design was in the first place. The versions of this wing concept we see coming to market are copies of our early prototypes. These prototypes had issues that we worked through and solved.

The usability problems don’t show up in a photo or video on Instagram in the hands of a professional athlete, but they will make an appearance in the hands of the average user. The Slingwing, on the other hand, has almost ten years of development history- more than all the other versions combined. The Slingwing is a well thought out, tested and refined piece of water sports equipment, developed by a company that is no stranger to being first and doing it right. They say imitation is a form of flattery. We say you know you’re winning when you’re being copied.

Why can’t I get one today?

We have been sitting on this innovation for 4 years.  Here is why it’s just coming to market now.

When can I get one?

Expect the first production models to hit the water Summer 2019.  The first batch of Slingwings are already sold out.  To get on our waiting list and for the latest updates about the Slingwing sign up now. 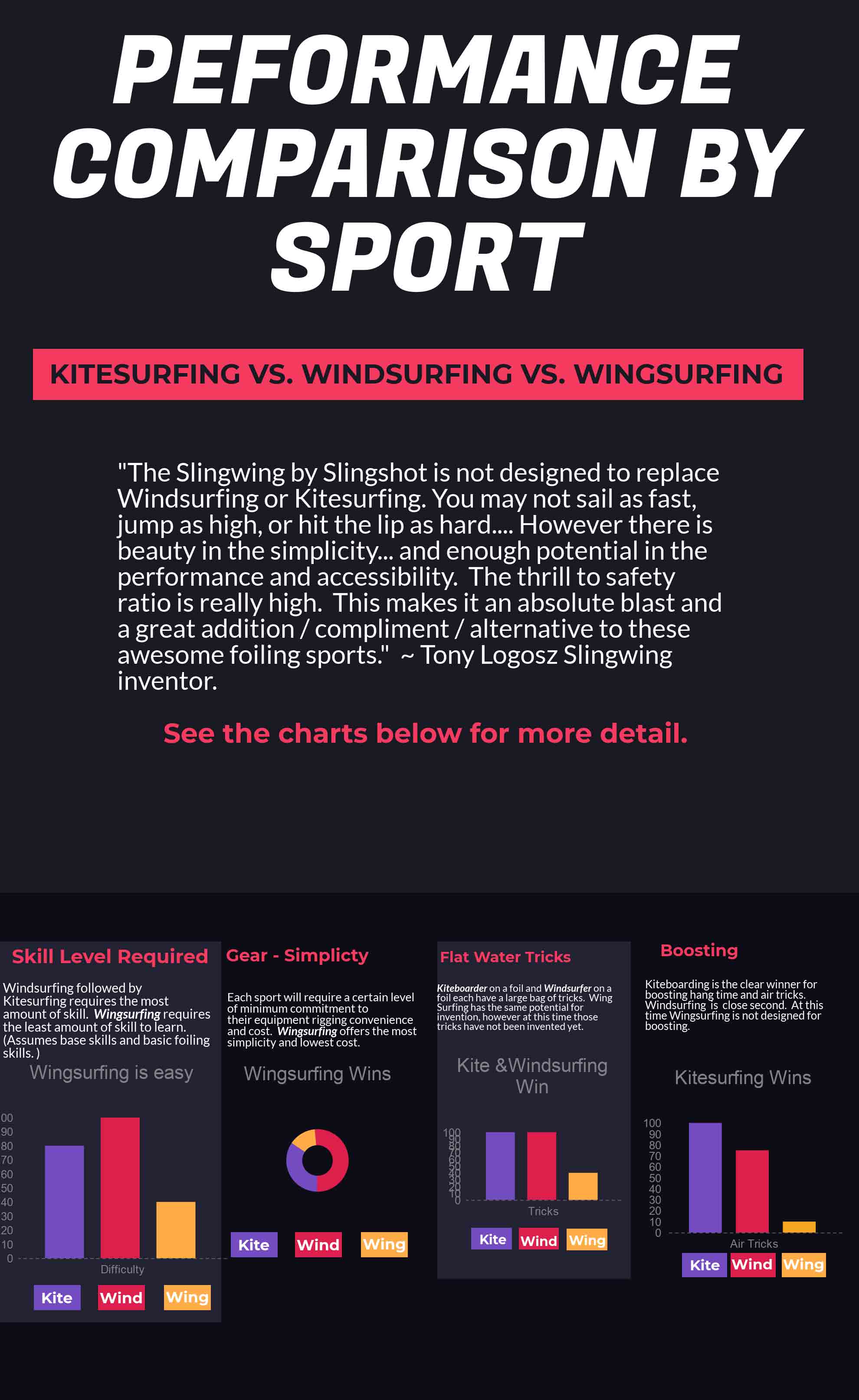