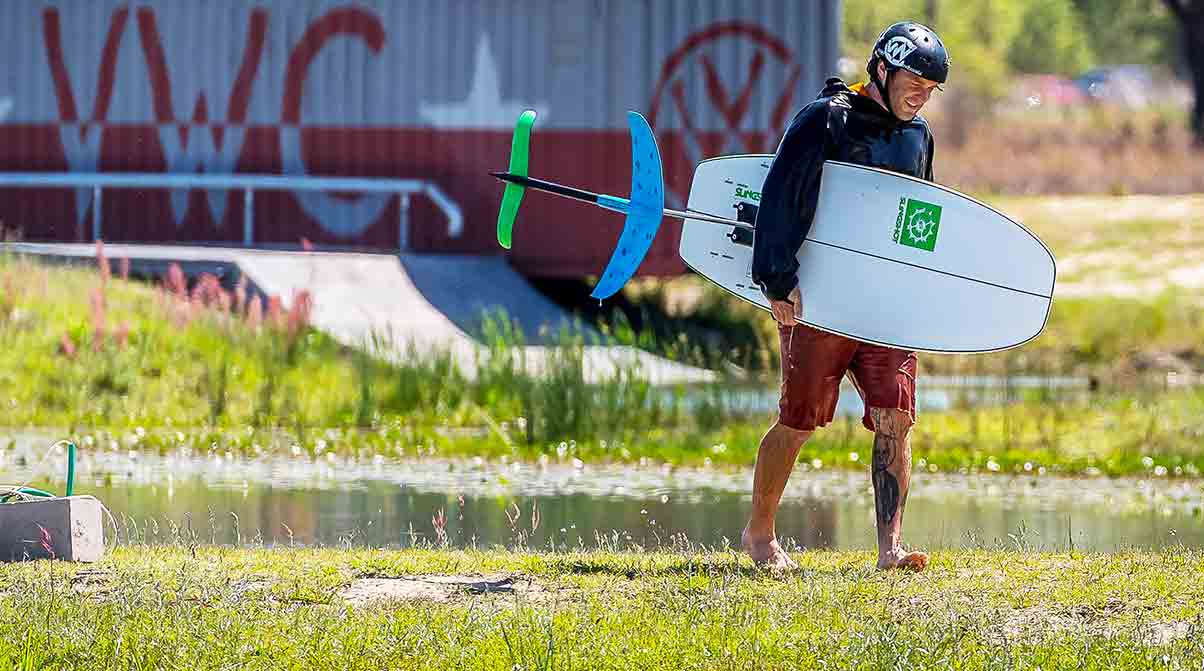 Top 5 Skills to Master While Learning to Wakesurf Foil

Follow these Top 5 Tips on learning to wakesurf foil from an industry insider whose already made the mistakes for you.

You’ve heard the expression “In one ear and out the other.” Well, that’s what one  “pro wakeboarder” (who shall remain anonymous for his protection) says is what happened to all the advice he was given before learning to wakesurf foil. After several sessions of trial and error, thee pints of water up his nose and several dozens severe faceplants, he’s now a proficient and very happy foiler. As promised he has some advice of his own, which he learned the hard way, read on an save yourself any frustration, assuming you have a better attention span than him.

Here are his top five tips for learning to wakesurf foil:

1. Start with a short mast and a long rope
“I’m physically fit, a multi-sport athlete and a solid wakeboarder, so rather than starting with a short mast, I arrogantly went straight to the full-sized mast and tried to surf right behind the boat. What a huge mistake! Those first few sessions were pretty rough. I got more water up my nose in one day than I did the entire summer. I did have a full 5/4 wetsuit, helmet, and booties as a cushion, which was a huge help even though it was the middle of summer and I was roasting hot. I wish I had started in board shorts, used the short mast and switched to the longer one when I was ready.”

2. Go with your crashes, don’t resist
“With a foil, once you’re off balance your likelihood of recorrecting is pretty much zero. After several sketchy crashes and one collision with the foil, I learned to just go with the crash as soon as I felt it. Instead of trying to ride it out, I kicked clear of the board while I still had some level of control. Holding on to the rope to pull you forward as you crash can be helpful as well.
3. Set your board up properly. “I spent my first two sessions skyrocketing out of the water as soon as I got up on the foil. I just couldn’t keep enough front foot pressure once I got up to speed to keep the foil in the water. Eventually, I realized why- I had the foil all the way forward on the track instead of all the way back. This might seem like a stupid mistake, but I’m sure I’m not the only one who has done it. Moving the board back on the track made a night and day difference.

4. Watch out for the wake
“If you’re like me, you’ll get your first sustained rides directly behind the boat with a long rope. The water there can be pretty rough and turbulent, so you’ll quickly want to cruise out to the side and ride in the flats. Getting out there without eating was a little tricky for me. As you cut to one side, you’ll start to edge against the boat, which creates tension in the rope and generates speed. At the same time, you’re passing over the wake, which drops about a foot or two in water level. I had several full-speed wipeouts trying to get to the outside. Eventually, I figured out to put tons of front foot pressure, this will bring the board all the way back to the water, cross the wake, then readjust and then get back on-foil.”

5. Watch Foil Academy
After my first attempt of wakesurf foiling, I decided to go through the lessons several times. The information, tips, tricks and step-by-step chapters in the course were a HUGE help and a great resource. I knew the basics of what to do and how to do it before I even started. The amount of time I spent on the course save me exponentially more time and energy on the water.”

Sign up for Foil-Academy today. It’s free. Or call us anytime. 509 427 4950. We’ve got experts from the leaders in foilboarding standing by to answer questions.