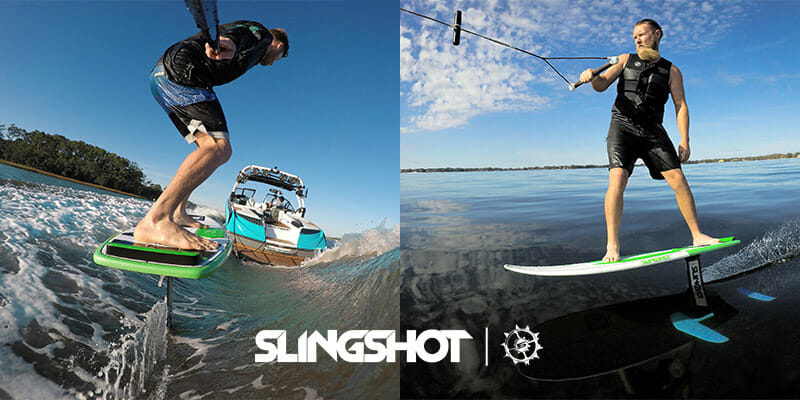 Team Rider Louis Floyd and Chief Foil Designer Tony Logosz runs through the details of the 2018 Hover Glide Foil Wake Package and explains the differences in wing performance between the standard H5 and the NEW H2 Surf wing. Now that we all know how to foil, it’s time to discover new riding locations boats and eventually beyond.

Wake Foil Behind Any Boat

Last year we launched foilboarding into the towable market, on the back of the curious people that make up the Slingshot tribe.  The foil eliminated the need for perfect water, the perfect boat or the perfect wake.  We noticed foiling opened up a new surfing experience never felt before.  It works behind pontoon boats, jet skis, I/O and V-drive boats. All you need is a rope and 10mph.

Rope or No Rope

We’re doubling down on that experience for 2018.  That means two riding options and unlimited accessibility with a rope or no rope.  Check this out.

The 2018 Hover Glide Foil Wake Package is a complete package designed for use with a traditional wakeboard rope, and can be used behind any boat.  It’s a little faster which makes all conditions a thrill.

Wake Foil on the 2nd Wake Back

The second story is our addition of our new H2 surf wing.  That’s right  anyone can switch out the smaller standard H5 wing, and add the NEW H2 Surf Wing (sold separately)  Get up, get on the wave, drop the rope.

Our H2 surf wing is a  little bigger and slower so it naturally wants to surf at the same speed of the wake. The H2 wing creates more lift at slower speeds and has more glide compared to the standard H5 wing

If you own a V drive, you can surf it right behind the boat, or second and third wave back! We have got up to 4th wave back and we’re sure the curious will do more!

So think about that…If you own a I/O you’re now invited to the wake surf party, as long as you’re riding the second wake back.  That is unheard of until now.   Your welcome.