The search has started in Australia for groms that love to shred on their favorite Slingshot wakeboards set-up. 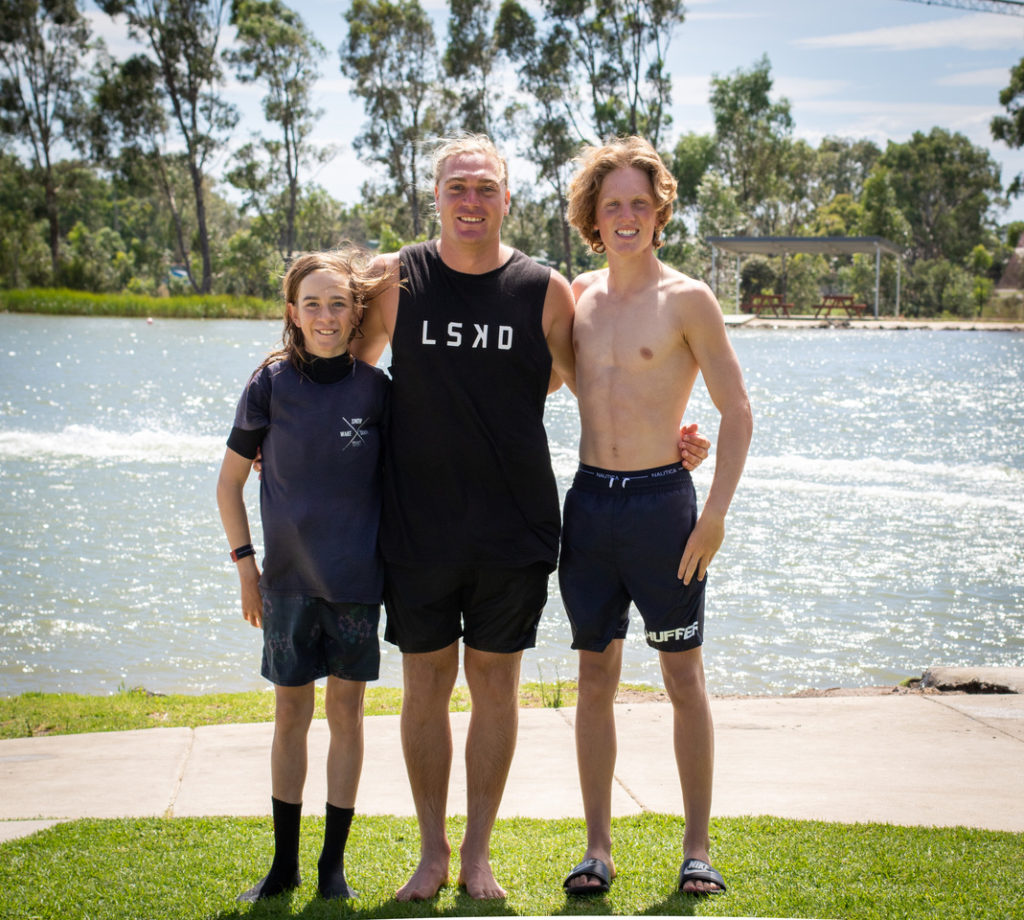 James Windsor and the next generation of Slingshot Shredders!

It’s safe to say that the next generation of Aussie Slingshot Shredders is in an awesome place.

The motivation behind the “Search for an Aussie Grom” came purely out of wanting to help our young Slingshot riders progress. For me personally, it’s been an awesome opportunity to visit our Cable Parks, and see what’s happening on my home soil. It’s been something I’ve been wanting to do for some time now, but with a pretty hectic International schedule, it’s been on the back burner a bit.

I started the search at Melbourne Cable Park.  A relatively new Cable Park on the Aussie scene, it’s only been opened a couple of years, and has two full-size Sesitec Cable systems.  The main lake has seven carriers operating in a clockwise direction. The second lake, has six carriers and operates in an anti-clockwise direction. It has an awesome high ropes adventure course, a busy aqua park, and an epic friendly vibe.

The last time I was at Melbourne Cable Park was not long after it opened, so it was awesome to see how much it had grown.  They were holding the last round of their three round Summer Series, so it was a great opportunity to source out some local talent. We had a meet & greet, and ride on Saturday, but it was super hard to pick just one rider. I ended up inviting two Melbourne rising stars to join me for a film session on Sunday.  Twelve year old, Reilly Delany-Wilcox, who shreds hard on the 2020 Super Grom, and sixteen year old Joel Zammit, who kills it on the 2019 Slingshot Coaliton.

We had an awesome time hanging out on the Sunday, and stacked a load of clips for the Blog. The progression of both riders in just a weekend was amazing, and I can’t wait to see where Reilly and Joel are at when I come back to visit Melbourne Cable Park next.

Here’s what Joel had to say…..

What’s your scoop and how long have you have been riding?

Joel Zammit, 16, I started riding at Melbourne Cable park when it first opened and I’ve been flat out riding for over 2 years.

Where is your home park, what do you love about it and what is your favorite obstacle?

My home park is, Melbourne Cable Park and the thing I love most about it is just the friendly vibes you get from the daily people who ride, and workers who run the park. My favorite obstacle would have to be the ‘C and B rail’ just for the fact of its simplistic design, which makes it easy to put together great combinations of tricks.

My favorite trick would have to be a flat water back mobe, because of the fact it took so much blood, sweat and tears to achieve, and also that I love performing air tricks in general. 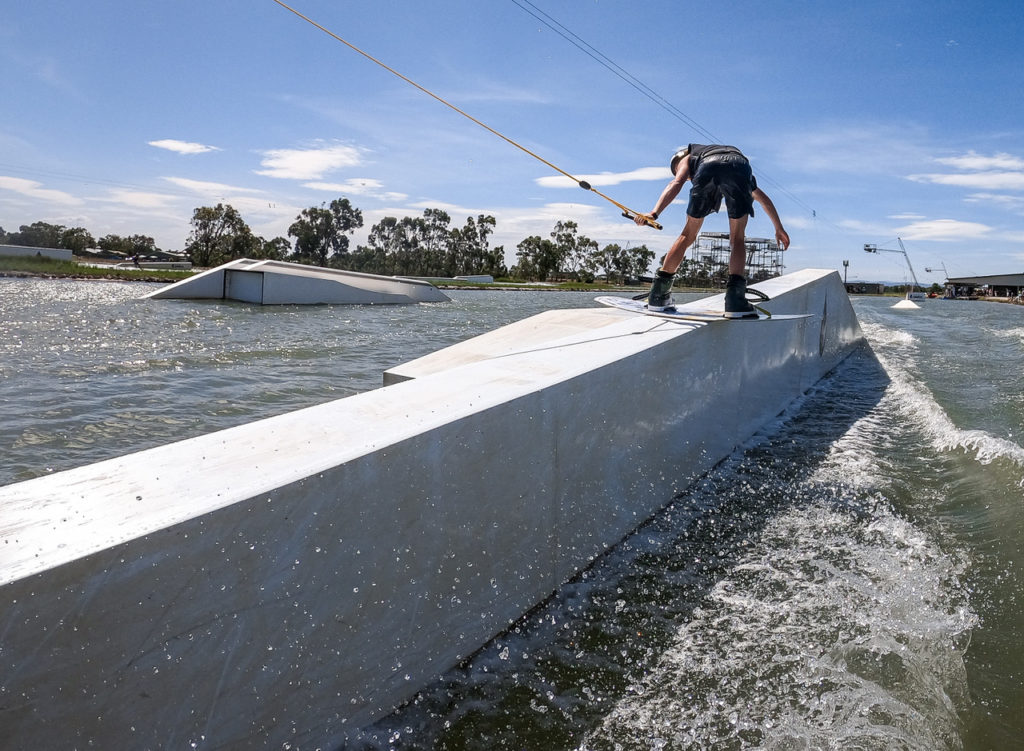 What Slingshot board do you ride, and what do you love about your set-up?

I ride the 2019 Slingshot Coalition. The thing I love about my setup is the how well the board can hold an edge and the flex it has when you want to perform presses on rails. I also love the reputation the board comes with due to it being Wesley Mark Jacobson’s board “the water dancer” it gives you the feeling of just becoming a more steezy rider in general and makes you feel like your apart of the Space Mob. Another thing I love about the board is the graphic and the fact that they hid the 2020 slingshot space mob directional in the pyramid at the bottom of the graphic.

I’d love to, when I’m older, travel the world and explore all the best cable parks that they have to offer.

Thanks so much for yesterday Windsor, I really enjoyed participating in Slingshot’s first “Search for an Aussie Grom” it has been one of my dreams to go for a doubles shred with you, and for you to film me as well, was just crazy. I had so much fun and I’m so grateful to have ridden with you and also thankful for you helping to push me to learn new tricks like that insane gap which I almost died on and that steezy front lip transfer. Thanks again man, I couldn’t ask for a more chill and good bloke to have a ride with and learn so much from all at the same time. Can’t wait to see the edit.

Here’s what Reilly had to say…..

What’s your scoop and how long have you been riding.

My home park is Melbourne Cable Park. The team at the park are super nice and helpful – it’s a great place to hang out. I’ve made some really good friends there.

My favorite feature is the rooftop/ fun box.

What Slingshot board do you ride, and what do you love about your set-up?

2020 Super Grom board with 2020 KTV boots. This board is really flexy and great for lightweight riders like me. 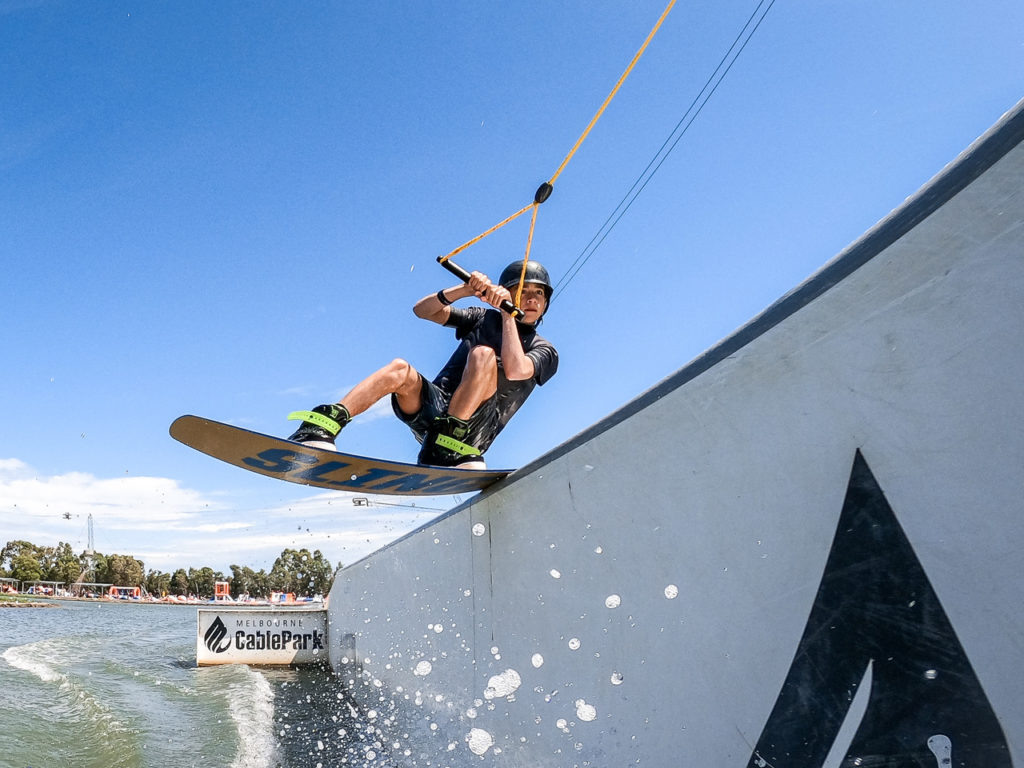 I am a really keen wakeboarder. I want to learn as much as I can and hopefully progress to a professional level in the future. I had a great time riding with you on Sunday James.

It was great to be part of Slingshot Australia’s first “Search for an Aussie Grom”. It was amazing to meet you James and I was so pumped to ride with you. I can’t wait to see the blog.

Who knows, hopefully we will see these shredders chasing the World Tour one day.