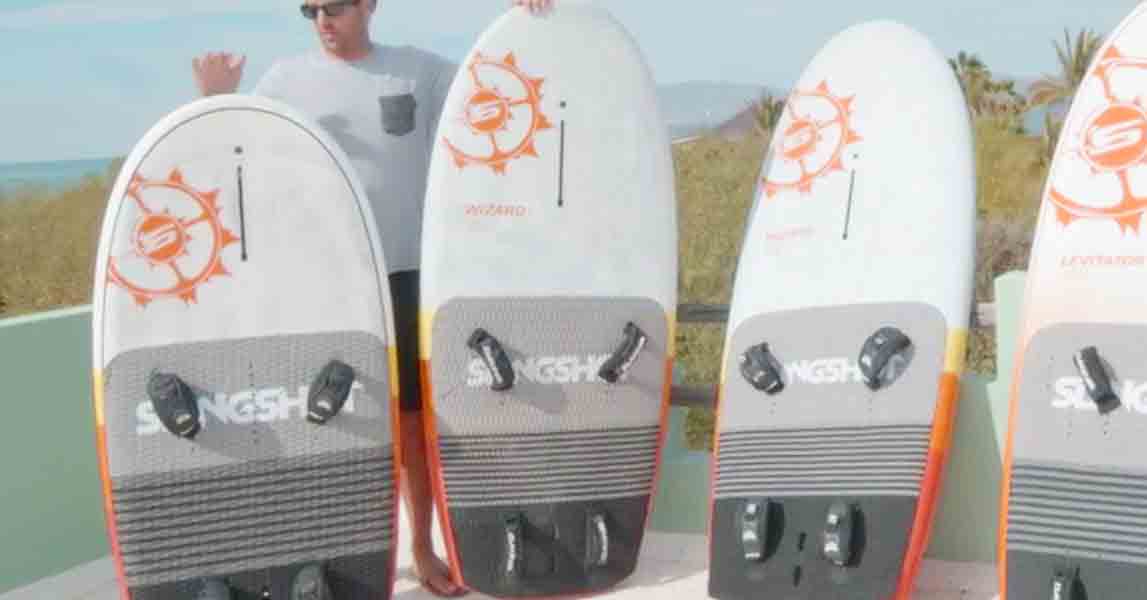 What Wizard Windfoil board is right for you?

The Wizard Windfoil board is offered in three sizes. Here is the distinct breakdown of how each one has a different style.

If you are not convinced this board is for you.  See what Windfoil Zone has to say on their review here.

Here is the breakdown of the video:

All right, so let’s talk about the Wizard line first. I feel like the flagship board in the Wizard line is the 125, this is it here. My windsurf center blows 5’0 on most regular windsurfing days. It’s a pretty windy place. The Wizard 125 is what I start most of our guests on, as long as they’re not bigger than 90 kilograms. This is kind of the goto intro board. It’s big enough and wide enough in the tail, tons of volume and the tail that you can uphaul and get straight into the footsteps and then pop up onto a foil from the foot straps. That’s the big thing about foiling is that we’re all used to regular windsurfing, where we have our feet quite far forward and start pumping and getting planing. Once you’re planing then you move back. On a foil board it’s different as it’s designed to lift when your feet are back in the foot straps. So the second you start slogging and moving a little bit, you go right back into those footstraps and then pop up onto the foil from there. It’s gotta be able to support that. Choose the Wizard 125 if you’re going to be using a 6’0 or a 6’5 or bigger. If you’re a bigger sailor or if you’re one of the sailors that uphauls, gets going, hooks in and kind of waits for that gust to pick you up and then gets up onto a plane then the Wizard 125 is the board for you.

The Wizard 105 is for more aggressive sailors. If you can uphaul your 100L board, you can uphaul this 105. If you’re used to aggressively pumping out of the harness onto a plane. There are a lot of the really good sailors in the Columbia River Gorge and down in La Ventana.  I’m like, just get the 105 that’s all the board you’re going to need for some of our riders who are in Florida where the wind is really light. The really skilled guys say that they can actually get the 105 up onto a plane up onto the foil just as quick as the 125, it just takes a different technique. You need to start kind of normal windsurfing stance with a front foot further forward, back foot in between the back foot straps, pump the board up so it’s kind of out of the water. Then move back into the foot straps while you’re still pumping and continue to pump from there up onto a foil.  So, if you’re a lighter sailor and you’re really good at uphauling a 90 or 100-liter board or you’re just an aggressive pumper then the 105 is thinner, better for jumping and it’s shorter. It also has that more direct to foil feel. If you’re an aggressive pumper, you’re still going to be able to get it up onto a foil in just about the same wind as the 125, it just takes more pumping technique and finesse.

You may say, well, what’s the difference between a 103 and a 105? The numbers are a bit misleading. The 103 is a foot shorter. It is significantly shorter than the 105 and the Wizard 103 is for people who really aren’t going to be uphauling. You’re just going to water start most of the time. This really short, compact shape gives you an absolute direct foot to foil feel. You don’t have any swing weight or sway coming from the nose. Just everything you do at the board transfers directly to that foil and you kind of don’t get overpowered by the length and the nose there. This is a favorite board of our designer, Tony Logosz.  It pairs really well with the bigger Slingshot foil wings. With a bigger wing, it gives you so much lift that it actually feels like a bigger board. It is not easy to uphaul I can’t lie to you there. I’m a really proficient uphauler and  I can uphaul my 80L board, but I may not uphaul 100% of the time on this 103, I might fall in every now and then because you’re going to have to learn to uphaul with both feet behind the mast track.  So the 103 is for the advanced foiler who wants that crisp, absolute direct foot to foil feel. They’re going to be water starting most of the time… pretty much all the time. And you know, they want a board that they can rip around when it’s blowing 25- 30k and still feel totally comfortable on the foil without getting pushed around by a very big board.