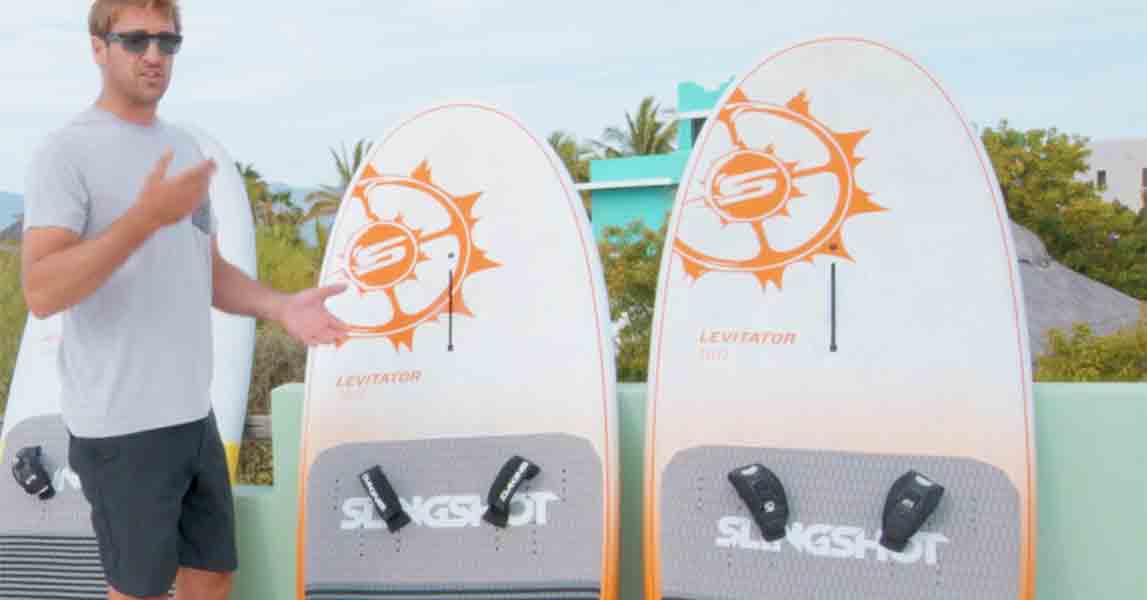 Which size Levitator windfoil board is right for you?

Learn to master windfoiling on a board that is great for all variations of wind.

Hers is an in-depth look at the Slingshot Levitator 150 and 160 foil boards, the differences between the two and why you might want on versus the other. If you’re unsure about which one is right for you, this should give you more than enough information to make the right call.

Here is the breakdown of the video:

And now we’re going to talk about the levitator boards. Two sizes, 150, 160. Both of them have a track foil mount system on the bottom. This allows you to move the foil further forward and further back to adjust the point of lift. What’s so important about that is, if you’re a beginner windsurfer and you haven’t gotten to the level in windsurfing yet where you’ve mastered riding in the foot straps and the harness, you can still get this thing to foil. So you can still learn to foil before you’ve learned to use the foot straps and harness.

When I move that track all the way back then, kind of like the other boards, it’s designed to lift with your feet back in the foot straps. So that’s a really cool thing about the levitators (both of them) is that you can actually learn to ride the foil before you’ve mastered the foot straps and harness.

The 150- I think that’s for the sailor who wants to be in extra light winds. They want to be able to get in those foot straps right away and be able to slog waiting for just that little gust, and that little gust comes you already have enough volume, you’re sitting high enough on the water, it’ll just take you away and lift you onto the foil.

It’s a foot shorter, and three centimeters or an inch narrower. It’s just more nimble, but it still has a ton of float. The Levitator 160 has a foot longer nose. So if you want to be able to tack it, you’ve got a big cambered sail and you’re waiting for a gust just to come and you want to be able to tack, go for that 160. Also, the 160 is wide enough and big enough to teach all but the heaviest windsurfers on.

Another cool feature of both these boards is that they have both outboard and inboard foot strap settings. If you’re a total beginner foiler, if I move the foot straps inboard, it doesn’t want to foil as high as it does with the foot straps outboard. So you can avoid over foiling and just kind of sit a little lower comfortably.

But then with the outboard settings, I can move these footsteps out to the side. It foils at full height, it’s more of a high-performance machine. So, if you want a more high performance but a big floaty board, the 150. If you want a really big board that you can teach somebody to foil on, you can tack on, the levitator 160 is the way to go.