The Differences between the SlingWing V2 and the NEW Dart Wing

Wing design has come a long way since Tony Logosz designed his first Slingwing in 2011.   Foiling had not hit its stride and blasting across the water on a traditional SUP didn’t pique the interest of many at Slingshot HQ.  The design was shelved for years and this new sport sat dormant on a shelf in the back of the Slingshot warehouse.  When the wing frenzy finally came to the masses the SlingWing V1 was launched followed immediately by a slew of Tony’s prototypes for the V2.  They came in all shapes and sizes, some with large Leading Edge (LE), some with small, different degrees of dihedral, wing spans long and short.  The race was on to define the sport of Wingsurfing.

Tony and the R&D team keyed in on what was the most fun and achievable in winging.  The effortless feeling of letting the wing’s power go,  holding just the LE handle, and luffing the wing behind you as you focused on riding from swell to swell downwind.  From kiters to windsurfers and even the downwind SUP crew were compelled by the simplicity of the sport, its quick learning curve, and the exhilarating feeling of riding swell downwind.

We have been getting a ton of questions lately about whether the Dart will make the Slingwing V2 obsolete?

The Slingwing V2 is very well behaved, is incredibly user friendly, has no oscillation, does not like to flip over, and has almost no drag when drifting down wind.  It is exactly what you want if you are learning, riding waves or connecting swells on downwind runs.

The DART is for raw power and speed and should not be the first wing you buy.  It is designed to be used in high winds for jumping and speed reaches.  It is not a very well-behaved wing.  It likes to flip over and oscillates much more than the V2 when luffing and is simply more difficult to handle than the V2.   The huge LE does not slip through the wind easily when luffing downwind and feels like you are dragging a big LE through the air during luffing flight.   The Dart’s acceleration, top speed and loft in jumps are other-worldly.   The swept back wingtips allow you to waterstart sinker boards by laying the incredibly swept back LE on the water and using the power of the upper half of the wing to pull you over the board and onto your feet. 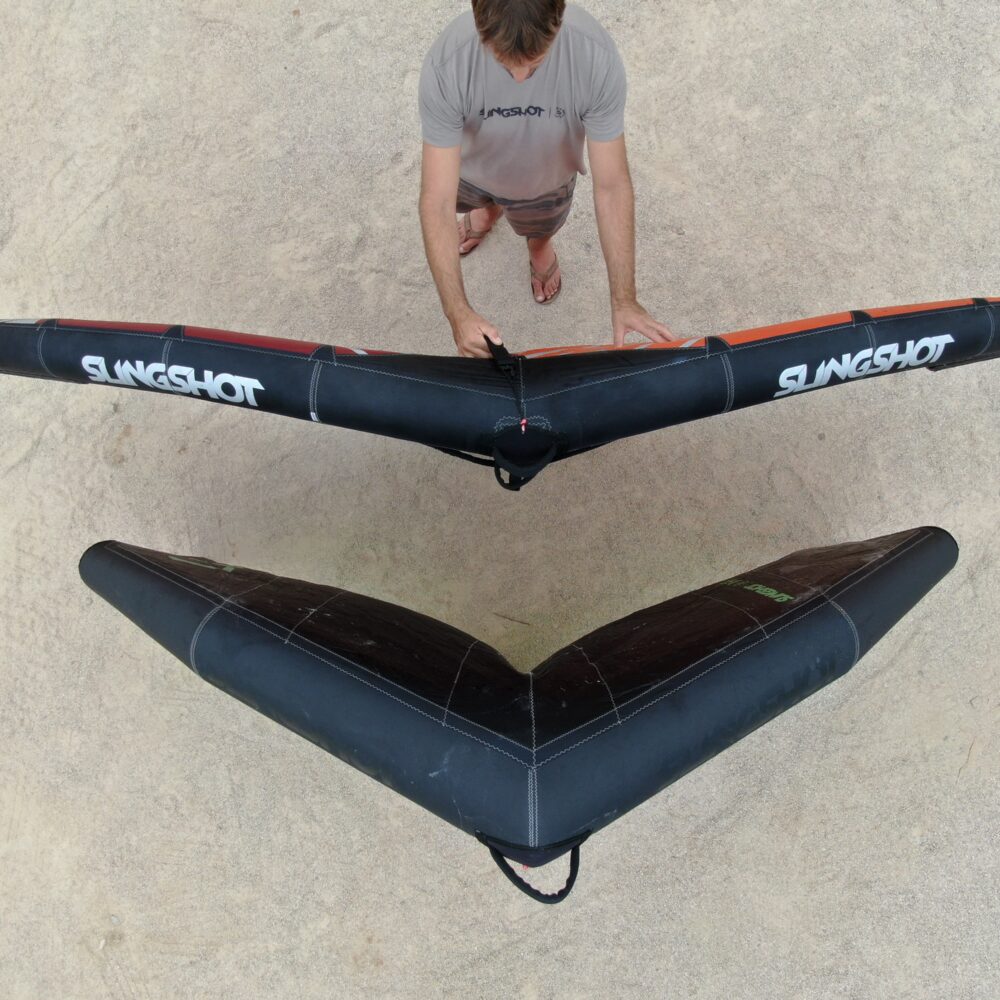 The SlingWing V2 was designed to be a drifting wing.

The SlingWing V2 was designed to go upwind very well and then disappear behind you when you luff downwind from swell to swell.  It has a very small LE (Leading Edge).  This provides it with great upwind ability, and it slips through the air when luffing.  It has minimal dihedral which makes it extremely stable in luffing flight and does not oscillate.

In short, it is a very well-behaved wing that allows the rider to focus on riding swell.

The trailing edge is very tight, allowing the wing to go quickly from powered to depowered as the draft (curved shape from LE to TE), flattens when you release the back hand and depower.  The negatives of this small LE is that it is prone to folding and dumping power in higher winds when not pumped up to a higher PSI.  It sacrifices a bit of low-end and overpowered ability to accel in upwind riding and downwind drifting. 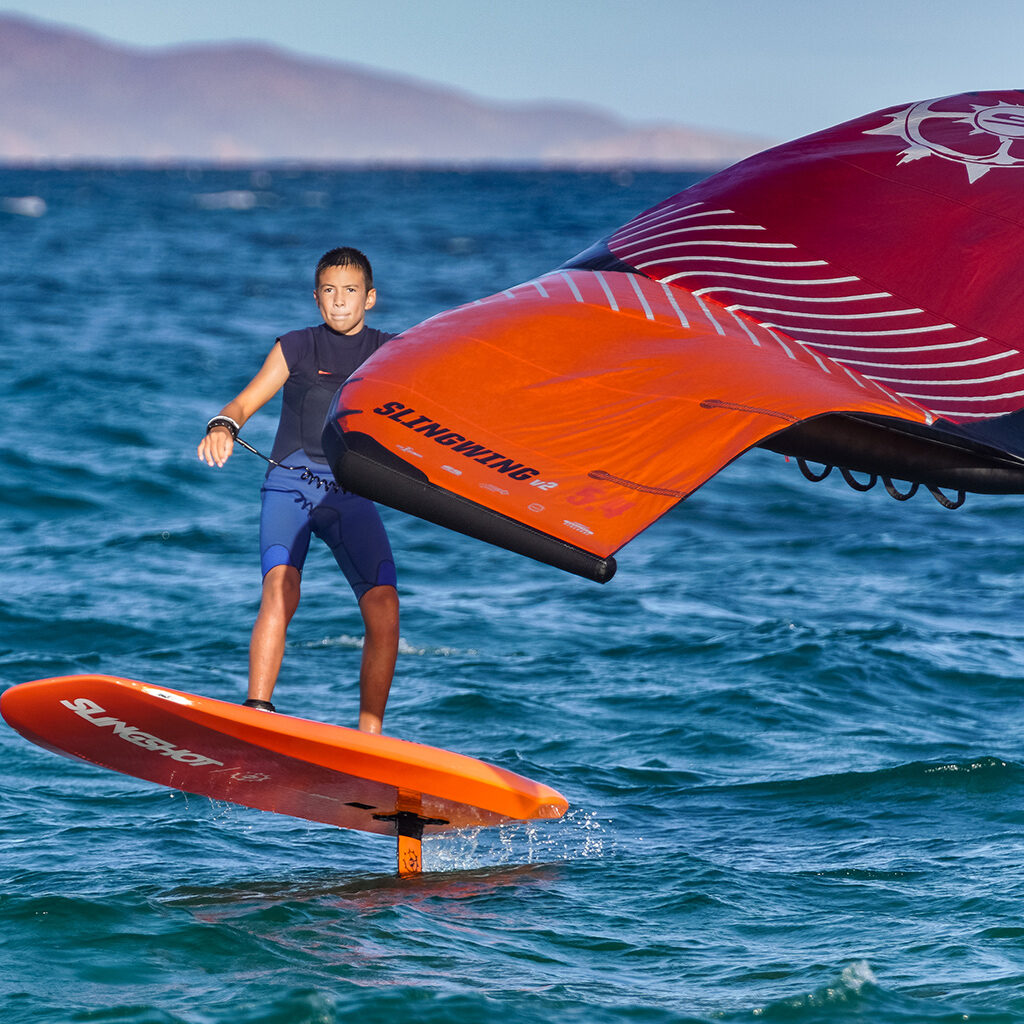 The Dart is made for speed, jumping and of course, flips.

In the beginning of Slingshot wing development, there was one outlier prototype. This model wing was ahead of its time, as many Tony Logosz inventions are. What is now The Dart, ended up in the hands of the Spencer Brothers, a couple of highly talented young Maui riders.  The Dart was designed to be the exact opposite of the SlingWing.  It was made for speed, jumping and backflips.  It has a huge LE (leading edge), a deep draft, and tons of dihedral.  It is not a well-behaved wing, (ie. not a beginner wing) and did not drift very well due to both oscillation and the massive LE creating drag.  The trailing edge billows like an old-school hang glider and provides a significant power source.  The air flowing over the large LE and into the trailing edge billow gives it incredible loft in jumps. Normally such a huge LE would make a wing slow and not very good at going upwind.

The speed difference is immediately noticeable.

The pointy nose and raked back wing tips of the Dart (think fighter jet) shed the vast majority of the headwind and give it a much higher top speed, better acceleration, and good penetration into the wind.  Instead of having the entire big LE exposed to the wind and creating drag, the pointed nose and swept back wing tips make it quite aerodynamic, like the wings of a fighter jet that fold back to reduce drag during hypersonice speed. 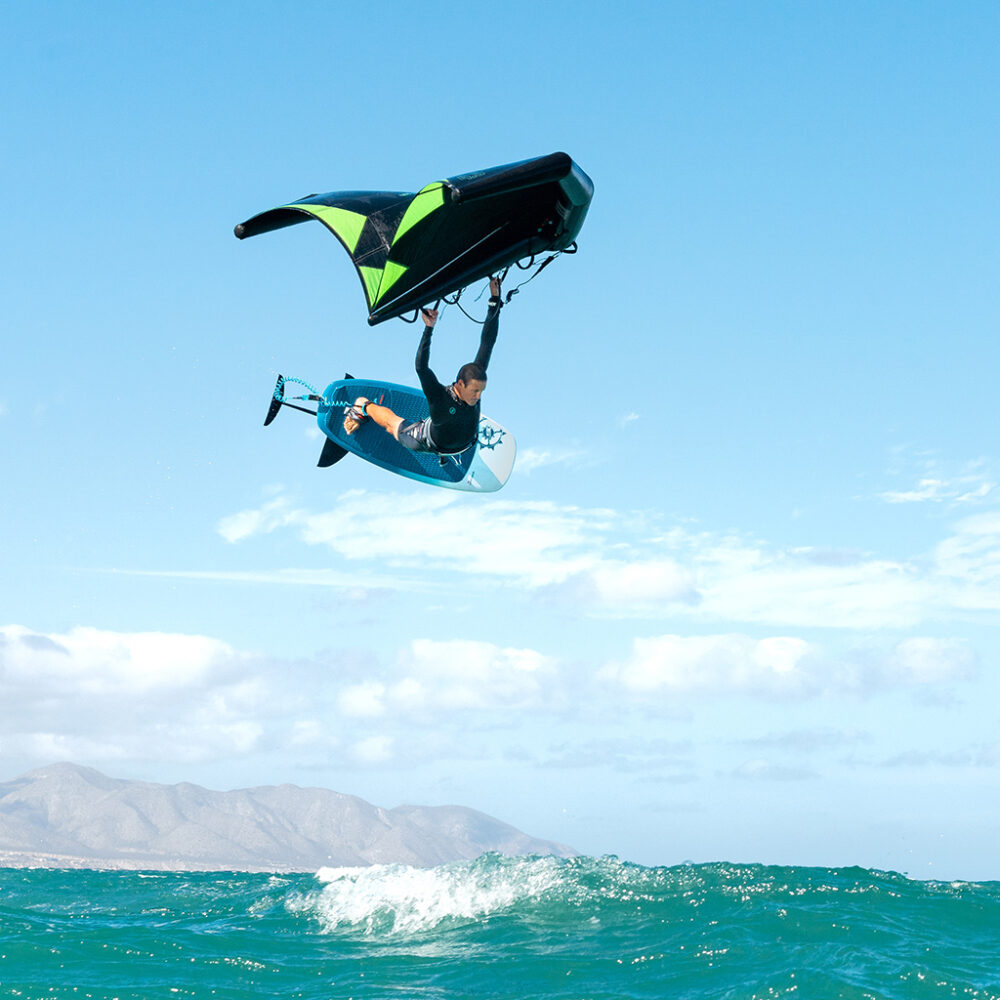