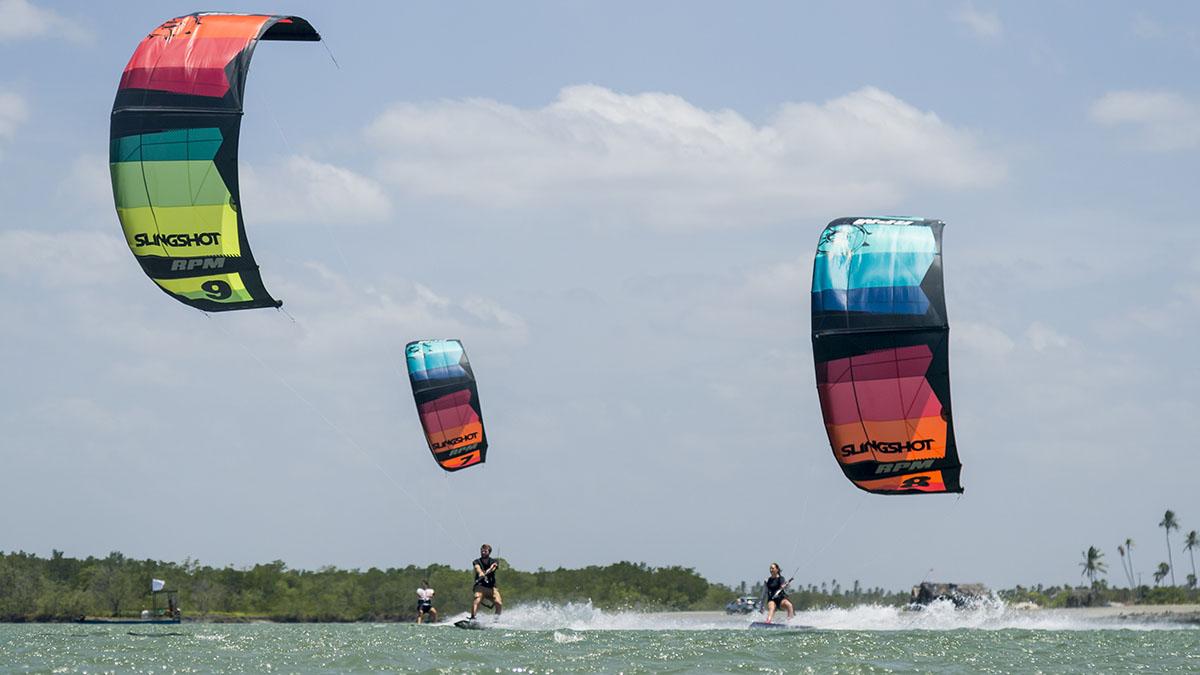 Not the RPM the NEW RPM | 2019 Slingshot. The RPM has been the kingpin of Slingshot’s kite line for a decade …

Ten years ago our mad-scientist designers locked themselves in the lab and made it their mission to stitch together all the best features into a single kite. When the smoke cleared, the RPM emerged. With the drift of a wave slayer, the pop of a freestyle freak, the boost of a C, the relaunch of a hybrid and the depower of a delta, the RPM hailed a new era in kite performance, and we have been proud to call it our pride and joy ever since.

And now we have made it even BETTER

With multiple world titles to its name and popularity across a broad range of rider types, we could have called it good with the RPM and left it alone. But, as anyone who has come to know our brand will attest, our pursuit of innovation never stops. So, in classic Slingshot fashion, we set out to make a great kite even better.

We are thrilled to release the 2019 RPM. The changes we have made to this kite, both in design and performance, have far exceeded what we hoped to accomplish. The new RPM has humbled even our most skeptical team riders who begged us not to change it. In short, we have achieved everything we set out to, while sacrificing none of the features people love so much about the kite.

This is no longer the RPM- IT’S THE NEW RPM

With a new Deep-C shape in the air, a completely reworked FlyLine Bridle system and new Load Shift steering, the 2019 RPM has been reengineered for bigger, loftier airs, more powered loops and more reactive handling, while maintaining its renowned reliability and all-conditions versatility.

The NEW RPM is big air AND feather-like landings. It’s insane pop AND easy relaunch. It’s crazy, gusty, gnarly wind reliability AND safe, user-friendly freedom. It’s high-performance and low risk versatility, no bullshit, no gimmicks, no holding you back. This is the NEW RPM, and it’s ready for you.

In the words of our designers, the FlyLine bridle is like power steering for your kite. The pulleys allow the tow points on each side of the kite to travel as the kite turns through the window, while the bungees restrict the length of travel to maintain optimum structural support no matter what direction the kite is flying. This means both sides of the kite are engaged at all times, rather than one side or the other, depending on which way the kite is flying.

The 2019 RPM has a deeper C shape in the air than in previous years. A completely reinvented bridle, called FLYLINE Bridle, changes the geometry of the kite in flight and has a big impact on performance- most notably in overall power, structural stability, hangtime/loft and control while boosting. Translating to the rider, that means higher and longer jumping, more upward carry on kiteloops, more stability during dynamic flight and less critical timing and bar input to jump, soar and touch down softly.

The new configuration of the FlyLine bridle and the location of the pulley/bungee segments give the 2019 RPM a dynamic steering behavior unlike any other kite Slingshot has made. Best described as LOAD SHIFT, the FlyLine bridle transfers power and load actively from wingtip to wingtip as it flies.  Where other kites will warp or twist under load, buckle at the wingtips, flutter or stall out in the air, the new RPM shifts and distributes load actively throughout the canopy, resulting in smoother, cleaner and more powerful performance.

Check out these articles for more info on the 2019 RPM: